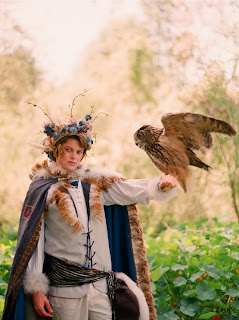 What? You've never heard of this god before? Until relatively recently, neither had I. The simple explanation is that he's the Roman counterpart of Pan, but there's a bit more to it than that.

Faunus (pronounced "FAW-nus") is the Roman god of nature, forests, and fertility, and his name is Latin for "animal." The name Fauna means the same thing. Fauna is either the female form of Faunus, or his wife, or his sister, depending on who you ask.

Faunus has the upper body of a human, and the horns and lower body of a goat. But he didn't originally. Some believe that Faunus is based on a real person of the same name who was the King of Latium. After his death, a small cult formed around him that gathered to worship in the sacred forest of Tibur. The sources I read make it sound like Faunus developed separately from Pan and then was later mushed in with him, so to speak. So they made him look more like Pan as well. Faunus has a consort of fauns, which are spirits of untamed woodlands similar to the Greek satyrs. He is an oracle god that is gifted in divination. He is able to predict the future via prophetic dreams and voices speaking to him from sacred groves. He also loves music, and is often shown playing the pan flute.

One of this god's more famous stories involves a music competition. One day, Faunus boasted that his musical abilities were better than Apollo's. Apollo challenged him to a pan flute battle, with King Tmolus serving as the judge. Apollo had the better instrument, so he won. But King Midas disagreed with this decision. Evidently, Tmolus didn't like being contradicted. He gave Midas donkey ears as punishment.

Faunus plays a big part in the festival Lupercalia. On this holiday, dressed in goats skins and hit fellow Romans with goat skin belts. There was also a second holiday called Faunalia, observed on December 5th, that celebrated Faunus as well.

I thought Faunus was a cool name the moment I saw it. However, I can see that some people might feel that the "fawn" sound at the beginning makes this name sound...wimpy. It's not a deal breaker for me. I love deer. But just because the parents don't care about traditional gender assumptions doesn't mean that the rest of the world won't. It's not fair, but that's the way it is, at least in the United States. It's up to you to decide how daring you want to be.