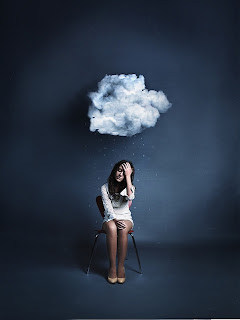 I first came across the name Nimbus in Dinotopia. It's used for a dinosaur, but I love it for a human.

Nimbus (pronounced "NIHM-bus") has a few different definitions. Literally, it's derived from nebh, which is Latin for "cloud" (it's like a brother to Nephele). It is specifically used today in reference to storm clouds. I see a lot of nimbostratus clouds living in the Pacific Northwest. They are almost uniformly gray and hang low in the sky. But the dictionary gives a few more meanings.

1. A cloudy radiance said to surround a classical deity when on earth.
2. A radiant light that appears usually in the form of a circle or halo about or over the head in the representation of a god, demigod, saint, or sacred person such as a king or an emperor.
3. A splendid atmosphere or aura, as of glamour, that surrounds a person or thing.

Halos are usually seen as property of the Christian religion, but the truth is that it's used as a shorthand in art from many different cultures. You can find it in some form or another in the iconography of Ancient Greece, Ancient Rome, Hinduism, Buddhism, and some Islamic art. In his poetry, Homer describes an unnatural glow around the heads of heroes in battle. A nimbus can also take the form of flames surrounding the head or the whole body, and this is more common in Asia. The Islamic religion is famous for condemning any art that depicts humans or Muhammad, however they are present in Persian miniatures from various time periods.

Nimbus has never been a common name in the United States. I doubt that many people are even familiar with the term. I've seen a few little girls named Halo, but never Nimbus. Nimbus shows up in the world of Harry Potter, but it's not on a person. The Nimbus 2000 was Harry Potter's first broomstick, given to him when he became a seeker on the Quiddich team.

I see Nimbus more as a boy's name because of the "-us" ending. But that doesn't mean that it could only be used for boys. Could be a neat name for someone born during an April shower.