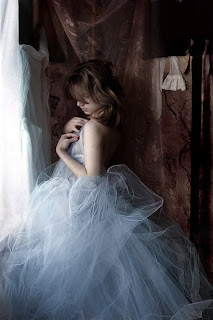 This lovely mythical name has not seen much use at all, and could be a fitting name for a girl with her head in the clouds.

Nephele (pronounced "NEF-eh-lee") is Greek name meaning "cloudy." It's Latin variant is Nubes. In Greek mythology, Nephele is a carbon copy of Hera created by Zeus. It appears that on some websites she is listed as a nymph, but I don't know if she could logically be characterized as a nymph after reading about her. Unfortunately, her story is not a happy one.

King Ixion was invited to a banquet on Mount Olympus with the gods. Ixion was filled with lust for the goddess Hera, the wife of Zeus, and intended to rape her. Zeus learned of his plan, and created an incredibly lifelike replica of his wife out of the clouds. He named this person Nephele. Ixion fell for this and sought to rape Nephele instead (it's not really clear from my sources whether he succeeded or not). Zeus caught him and punished him by tying him to a flaming wheel and casting him into the Underworld.

However, Nephele could not become unmade, and now Zeus had to contend with a carbon copy of his wife running about. She became something of a nuisance to the other gods. Nephele did not have a strong sense of identity as she was constantly mistaken for Hera. She would break down into constant fits of crying. Zeus eventually married her off to King Athamas of Boeotia to get her out of his hair. Things went well with her new family until after the birth of her two children, Phrixus and Helle, when her depression came back.

Nephele also has a connection to the myth of Aries. Because of Nephele's constant melancholy, Athamas divorced her for Ino. Ino hated her new stepchildren, and hatched a plot to get rid of them. She roasted all the towns seeds so they would not grow, which scared the farmers. The farmers sent to men to the oracle for assistance. Ino bribed the men into saying that the oracle told them to sacrifice Phrixus. Nephele learned of this and sent a flying golden ram to collect her children and escape. On their journey, her daughter Helle fell and drowned, but her son was saved.

Nephele has never been a common name in America. The only human being with this name that I could find was Nephele Tempest. She is apparently a successful literary agent, with a specialty in romance novels. I have no idea if that's the name she was born with.

Except for her obvious love for her children, Nephele is not a very positive character. However, I've always thought that Nephele could be a unique alternative to Penelope due to their similar origin and sound. It could be difficult to pronounce, but so many people don't know how to say Penelope either. Plus, I can't help but fall in love with it's "cloudy" imagery.