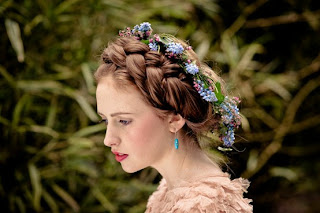 The eldest daughter in the Girls Gone Child clan is Fable Luella. As far as I know, this name wasn't used before her, and it quickly became a favorite.

Fable is an Old French word derived from the Latin word fabula meaning "that which is told." Aside from meaning "story," it could also mean "falsehood" or "pretense." Somehow I don't think that that's what parents giving this name to children are getting at.

Fables are also a type of literary genre. These types of stories were essentially "invented" by Aesop, who was supposedly a slave in Ancient Greece. They feature animals, plants, or inanimate objects that have human-like qualities. Fables always have a moral and are intended for children. Many scholars have attempted to find which mythology or culture fables come from, but realistically they could be from any of them including Indian, Greek, Syrian, Hebrew, or Egyptian.

They may be trivialized as kids stuff, but fables still have a large impact on culture in general. Popular Aesop fables include "The Tortoise and the Hare" and "The Lion and the Mouse." Both Bambi and The Lion King could certainly be categorized as fables. And George Orwell's novel Animal Farm uses an animal fable in order to critique Stalinist Communism.

Fable as a name has pretty much been whole-heartedly embraced by name enthusiasts. Rebecca of Girls Gone Child has stated that the only bit of difficulty this name has encountered is that many people confuse it with Mabel. Which might be working in it's favor in terms of it's "naminess" but might also work against those who want to use it as a boy's name. Still, Gable has recently been picked up for boys, so maybe it has a chance.

Fable brings to mind the magic(k) of storytelling. And since most, if not all, name enthusiasts are vicarious readers. So it's easy to see the appeal.