Spirit Animal Round Up: Owl 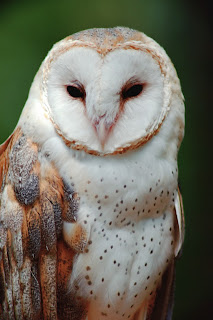 Here's another series of round-ups that I've planned: names to do with specific animals. According to my calendar, owls are the sacred animal of January. I don't know how much stock I would put into that, but owls are especially sacred to those of the witchy persuasion.

Owls are one of the world's oldest species of vertebrae animals. There are fossils dating back 60 million years that show that they haven't changed that much over time. Owls have a definite association with Witches due to it's preference for--and abilities in--the darkness. In many places they are still omens of death or illness. But for Neo-Pagans the bird is a symbol of wisdom, clairvoyance, and perception. It represents goddess energy, in particular the crone aspect of the goddess.

So it makes sense that someone would be looking for a name related to these birds. Here are a number of owl related names that I've gleaned from my search:

1. Athena. Her name is always the first that pops up when you look at owl related names. The owl that she carries around with her at all times is a symbol of good fortune.

2. Noctua. Athene noctua is the scientific name of the little owl, a species that lives in parts of Europe, Asia, and North Africa. The Athene part is not accidental, this is the specific species of Athena's pet. It's perfect for the bird's relationship with night.

3. Albertine. The albertine owlet can be found in Rwanda and the Democratic Republic of the Congo.

4. Arianrhod. A Welsh goddess who can shape shift into an owl.

5. Tawny. A few species of owls use this term and it most likely references their color. It is also a Gypsy/Romani name.

6. Owlet. Might be a little on the unusual side, but it could be cute. It's a term for a smaller owl, obviously.

7. Lakshmi. In Hindu mythology, this goddess rides a giant owl. On her holiday, Diwali, an estimated 1,000 owls are killed by black magicians so that their body parts can be sold.

8. Hibou. The French word for "owl," specifically the horned owl. There was a time in which owls were granted very high esteem in France, and as a result several of them were named as dukes.

9. Xiao. The Chinese word for "owl." The calligraphy character is associated with ferocity and bravery.

10. Wisdom. Aside from the bird's traditional association with wisdom, a "wisdom" is a group of owls (although it can also be a parliament of owls, but Parliament doesn't work as well as a name).

11. Snowy. Arguably the most popular species, the snowy owl has a famous ambassador in the form of Hedwig from the Harry Potter series.

12. Ulula. The northern hawk-owl from North America has the scientific name of Surnia ulala.

13. Bubo. The scientific name for the snowy owl is Bubo scandiacus.