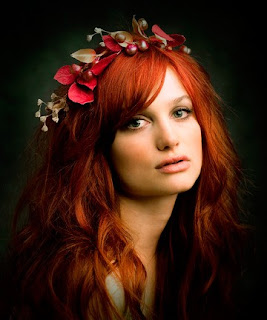 On Girls Gone Child, the twin sister of Boheme Shalom is Reverie Lux. This one's even harder to find something to say about, but I'll try.

Reverie (pronounced "REH-veh-ree" or "REHV-ree," depending on who you ask) is a French word derived from resver, meaning "to dream" or "to wander." Today when people say reverie they mean "daydream" or "a fantastic, impractical idea," but it wasn't always used in that way. From the 1400s to the 1650s, reverie meant "delirium," "frolic," "revelry," and "wild conduct."

The way we view daydreaming changed with the introduction of assembly line production. Before that, daydreaming was seen as a harmless creative activity that brought about new ideas. But as the assembly line took over craft production, there was no room left for creativity. Therefore, reveries became associated with laziness and danger. In the 1950s, some parents actively discouraged their children from daydreaming as they believed that it led to neurosis. Nowadays most people are much more lenient.

Reverie is also a genre of musical composition. It is instrumental style of music characterized by it's vague, dream-like quality. Reverie is also the name of a company that sells mattresses and a few musical groups and songs.

Reverie is a lovely name, and I can certainly see it appealing to those that like Avery. It's a bit of a stretch to say that Rebecca of Girls Gone Child invented the name as I've seen it used on some other children before. But it's still very rare. I've only seen this name on girls, but Avery is used on plenty of boys so why not Reverie?

If you want a beautiful sounding word name with a great meaning, Reverie might be for you.