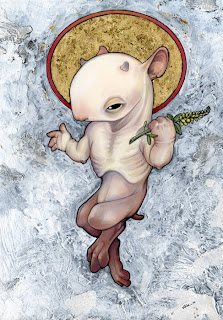 Hah! You didn't think I could find a name even more controversial than Jezebel, did you? Did you?

Seriously, I don't want to have to talk about this name and the character that embodies it. But I know that bigots are going to come onto this website sooner or later, and I know that I have to straighten some things out about this particular idol. I figured that sooner was better than later.

So where does this name come from? Basically the knights of the crusades really screwed up Muhammad's name. The name first appeared in a poem written in the 1100s. Baphomet (pronounced "BAF-oh-meht," I think) is mostly associated with the Knights Templar, a Christian military order that was suppressed in the 1300s. When Templar members were arrested and tortured into confessions, the name Baphomet came up a lot in reference to an idol they were worshipping.

A lot of pseudo-history texts appeared about Baphomet after the Knights Templar were suppressed. In the 1800s, a French occult author named Eliphas Devi connected the name to the goat-headed creature that we associate it with today. His book Dogma's and Rituals of High Magic included the image of winged-humanoid with a goat's head, a pair of breasts, and a pentagram on it's forehead (the pentagram is an ancient symbol of protection that was originally from Babylonia and Greece that looks like a five point star. It's the most important symbol for Wiccans, but unfortunately has also become associated with Satanists.)

I can not picture this name on a person at all. The character just freaks too many people out. If an adult wants to give this name to himself, that's his business. I assume it's been done since most everything's been done. Without knowing the association the name sounds cool, I'll give it that. But it would be the same as naming a kid Adolph Hitler, it suggests a disregard for the rest of society. I wouldn't allow my kids to go play in the home of a kid named Baphomet.

So what do you think? Is this the most controversial name?