Name Round Up: Names that Fight Back 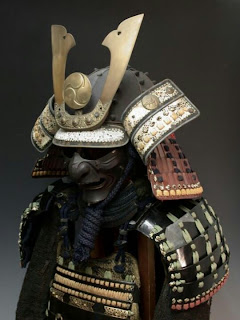 There is some debate over the appropriateness of naming children after weapons. One of the most controversial celebrity baby names last year was Breeze Beretta. I didn't recognize the handgun reference, so it didn't bother me as much. It also didn't bother me because I can picture a scenario in which I would use the name of a weapon. Let's say that the child is born sick and I want to bestow a name that will give them a fighting spirit (I am a little superstitious that way). I'm also attracted to the spiritual side of being a warrior. Some Neo-Pagans don't like to believe that this is true, but there are times in which being a warrior is good. I personally prefer more premodern combat weapons as well as the names of mythical weapons (you might notice that I love my swords). So here are the ones that have jumped out at me over the years:

1. Baudelaire. Most well known nowadays as the surname of an unfortunate set of siblings, a baudelaire is a type of short sword.

2. Gladiola/Gladiolus. It's the name of a flower, but it means "sword." It also brings gladiators to mind.

3. Remington. This is the name of a gun, and I don't usually go for that. But I always liked Remington, even though I wouldn't use it for my own child. It sounds distinguished.

4. Katara. Most well known as a character from Avatar: The Last Airbender, but it's the name of a type of dagger from India. And if you use Katara, why not Katana as well?

5. Bilbo. Yes, a bilbo is a type of sword that was popular in America for a while. The name comes from the city of Bilbao, where they were made and exported.

6. Mameluke. The name comes from the Mamluk warriors of Egypt. It's a type of sword similar to a sabre. Speaking of which...

7. Sabre. I always liked this as a name. Probably because it's so similar to my grandfather's name: Sabin. Nowadays, the sabre is popular for the sport of fencing.

9. Ida. A type of sword used by the Yoruba people of West Africa. But it's also a retro girl's name in the Western world.

10. Harpe. In Greek myth, Harpe is the name of the sword Perseus used to slay Medusa. Of course, this could also refer to the musical instrument.

12. Joyeuse. It's believed that Charlemagne gave this name to his personal sword. It means "joyful."

13. Technically cheating with the numbers here, but Excalibur, Arohnight, Clarent, Galatine, Secace, and Coreiseuse are all swords from Arthurian legend.