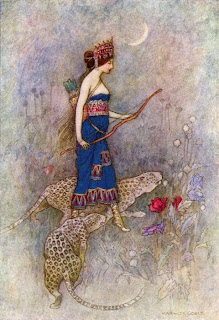 You may or may not have already seen the photos of Tippi Degre that are making rounds across the Internets. Tippi Degre is the daughter of wildlife photographers, and was born while they were working in Namibia. Up until she was ten years old, Tippi lived a life in tune with the animals and with the native Africans. Apparently she was given a second name (I assume it's from the native language): Okanti, meaning "mongoose." When she was ten, she went back to her parent's homeland in France (I wonder how that transition went). Tippi should now be about 21 years old. These photos will be published in a book.


Looking at these photos, I've felt something akin to searing jealousy. I went through a phase of loving all things African after watching The Lion King as a kid. She gets a pet cheetah? Where was my pet cheetah? I asked my parents for one. My second feeling was curiosity over her name.

According to the official website, Tippi is named after the American actress and fashion model Tippi Hendren. Tippi Hendren is most well known for her leading role in The Birds. After that, she stared in another Hitchcock film called Marnie. So where did her name come from? She was actually born Natalie Kay Hendren. Her father gave her the nickname Tippi because he thought that the name Natalie was "too much" for a baby. After coming into contact with many, many Natalie's in my lifetime, I find this sentiment beyond bizarre. And it's not like the name was that uncommon back in 1930, the year she was born.

Tippi Hendren is also well known for founding the Shambala Preserve. Hendren produced a film called Roar in 1981. During production her daughter and her then-husband were attacked by one of the dozen lion stars. Despite this, Hendren was inspired to help wild cats by forming a sanctuary in the Mojave Desert. Shambala is now the home of approximately 70 animals including lions, tigers, mountain lions, leopards, servals, and bobcats. Recent additions include two bengal tigers formerly owned by Michael Jackson. To this day, Hendren lives on the preserve and guides tours for the public.

So it's obvious to see why this name would appeal to the Degre's. But how about the rest of us? I have the feeling that Tippi is a bit too informal for most Americans. They would want it to be a possible nickname for, say, Tiffany, rather than let it stand on it's own. So Tippi Degre can enjoy her unique name for the moment, although according to the official website many people confuse it with Teepee.

So take a look at the gorgeous photos of young Tippi, and observe that sometimes having an unusual name is by far and away not the most unusual thing about a person's childhood.