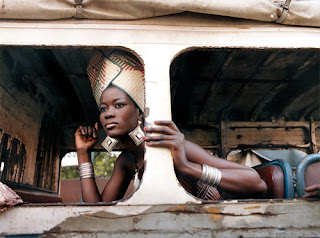 There is a shortage of African names here on this blog. This is quite embarrassing. I'm going to make a point of bringing in a lot more. Let's start with the name of a mighty African goddess: Oya.

Oya (pronounced "OH-yah," I think) is a Yoruba name literally meaning "she tore." As the name suggests, she is involved with many destructive things like hurricanes, lightening, earthquakes, and any and all forms of natural devastation. But the havoc she wrecks isn't done in an arbitrary, careless manner. She is the spirit of the chaos necessary to bring about creation and drastic transition. She is very similar to the Hindu goddess Kali. She also presides over magic, fire, wind, and fertility.

Oya's form is that of a human being, but when she dances she has the tail of a horse. Her twirling skirt creates tornadoes. Traditionally she is often depicted screaming, with wide open eyes. Oya is the sister and favorite wife of Shango. She has many titles, including "the Great Mother of the Elders of the Night" and "She Who Puts on Pants to Go to War." She is not a goddess of the underworld, but she does preside over cemeteries, spirit communication, funerals, clairvoyance, and rebirth. Oya is sometimes said to have a sister named Ayao, but the legitimacy of this goddess is questionable.

Oya is very important to Santeria, and is often merged with Our Lady of Candelaria (patron of the Canary Islands) and St. Theresa. Which would make her feast day...February 2nd. Well, I was close. Santeria Priests from Cuba have prophesied that 2012 will be the year of Oya. After reading about her, I think we all have an idea as to what that means. They have predicted that this year will be characterized by "war and confrontation, social, political, and economic change, and a dangerous increase in temperature."

Invoking this goddess is not a task that should be taken lightly. She speaks the truth, even when you don't want to hear it. But if you want to make the attempt, you must make the proper offerings. She loves eggplants, shea butter, grapes, and anything spicy. She loves all colors except black.

This name is only for the bold, and I'm not sure I would recommend it for a little child. Oya would be a challenging name to bear because the energy of this goddess is so wild and unpredictable. If you still want to chance it, Oya is a strong name especially fitting for the year 2012.

Hey, there is now a Facebook page! It's link is in the sidebar!