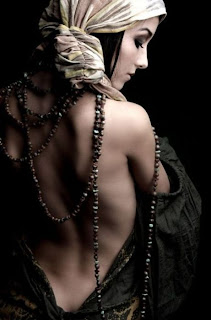 Venus remains one of the most well known goddesses, but apparently her name has yet to really catch on.

Venus (pronounced "VEE-nus") is a Latin name and word meaning "sexual love" or "sexual desire," although most baby name sources are likely to list it as "beloved" which, I suppose, is technically correct. As the name suggests, Venus is the goddess of love, sex, and fertility, but also of beauty, prosperity, and military victory. She was already in Italy when Greek mythology was integrated into the culture, but it is very difficult to figure out what attributes come from Aphrodite and which ones where already there. She has almost no myths of her own, and what ones she has came from Ancient Greek culture.

Nevertheless she was, and still remains, a very popular goddess. She is portrayed as a beautiful young woman, and is very often nude. She had her own festival (Veneralia was celebrated on April 1st) and her own cult. Apparently, the cult was funded by fines imposed on women for sexual misdemeanors. Venus loves water, roses, and myrtle. Some stories connect her to Mars, god of war, and together they sired Cupid. But other stories say she is Vulcan's girlfriend. She is also the mother of Aeneas, the Trojan ancestor of Romulus and Remus. In Ancient Roman dice games, the luckiest roll was called "Venus."

Like many Roman goddesses, Venus goes by a number of different names depending on what she is doing. Venus Genetrix is the mother of Roman civilization, Venus Felix takes care of luck, and so on. Venus absorbs and tempers the fiery male essence. Ancient Roman society dealt with her differently than they did with the other immortals. Usually, everything was very contractual and formal, "if I do this you will give me that" type of relationship. But with Venus, you had to charm and seduce her, and she may or may not choose to help you out.

As most people know, Venus is also in outer space. She is the second planet from the sun. After the moon, it is the brightest celestial body in the night sky. It is most bright shortly before sunrise and shortly after sunset, which is why it is known as both the Morning Star and the Evening Star. It is sometimes called Earth's "sister planet" due to it's similar size and gravity. It is believed that the planet previously had oceans, but they evaporated due to greenhouse effect.

But there's another important Venus for Neo-Pagans. It's the one from Willendorf. The Venus of Willendorf is an idol found in southern Austria. It was made sometime between 24,000 and 22,000 BCE. It appears to be a very round woman with a big belly, bit thighs, and big breasts (she looks pregnant to me). She doesn't have a face, but the artist created what looks like a braided helmet of hair. Several similar sculptures from this time period have been found, but this one is the most famous. Of course, Venus can be used an art term for any nude female figure. However, the use of this term in relation to this idol is slightly controversial because it implies a divinity that we don't really know is true. We don't know anything about it's cultural significance during the period when it was made, but we do know of it's cultural significance now. Many Neo-Pagans believe that this is a very early image of the Great Goddess, and it is often used in ritual spaces.

I expected Venus to be more popular than it actually is. It's not on the charts at the moment. It was most popular back in the 1970s, peaking at #710. I thought American tennis player Venus Williams would have brought in more namesakes, but apparently not.

But Venus seems like the perfect candidate for namesakes as she is generally a benevolent goddess with no tragic mythology. I would like to see more little witchlets with this name.

Image Credit:
Found via http://pinterest.com
Posted by Isadora Vega at 10:57 AM