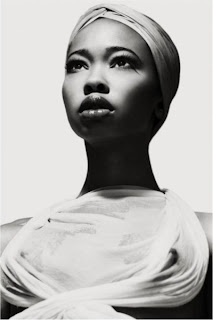 There are many ancient cultures and empires, but most history books don't touch upon Ancient Nubia.

Nubia (pronounced "NOO-bee-ah") is derived from the name of the Noba people, who were the nomadic tribesmen that first settled in the area. That area is along the Nile River, one-third into southern Egypt and two-thirds into what is now Sudan. Until recently, historians didn't bother distinguishing between the Ancient Nubian and Ancient Egyptian cultures. Now, Afrocentric scholars are bringing a new focus on this previously overlooked empire. But much has yet to be uncovered.

Ancient Nubia is the earliest recorded Black culture. They share somethings with Egyptians, but mostly they were quite distinctive. One thing that was noticed was that the Nubians had an unusually high number of female rulers. And they were not just any queens, they were warrior queens. There are depictions of them smiting their enemies. Like the Egyptians, the Nubians relied on the flooding of the Nile River for crops, but many of them also remained nomadic.

The Nubians relationship with Ancient Egypt was mostly economic. When you see Nubians in Egyptian art they are usually merchants and tradesmen. The Nubians had gold, ivory, ebony, giraffes, monkeys, leopard and panther furs, ostrich feathers and eggs. They were pretty much Egypt's gateway to the rest of Africa. Other times they warred with each other. They were constantly conquering and reconquering the same territories. Egypt had a lot of Nubian slaves. They also intermarried. The famous King Tut was actually half Nubian.

There are still Nubians existing today, but their culture is very different. The ancient empire split into three parts. Then they were conquered by Christianity, and yet again by Islam. Unfortunately, many of the ancient temples, villages, tombs, and monuments were flooded by the Nasser Lake, which was created by a dam. This makes study very difficult. Of course, there is the usual danger for any American, or any person at all really, going into Sudan.

Not surprisingly, gospel music is a cultural dead zone for Neo-Pagans. But if you love the sound, there's "The Gods Love Nubia" from the Broadway musical Aida. In the musical and the opera on which it's based, Aida is a Nubian princess taken by the Egyptians as a slave. She has a forbidden love affair with an Egyptian general.

I'm a bit surprised that I've never seen Nubia used as a name. Seriously, African Americans should be all over it. Perhaps the association with Sudan might be off putting for a few people. But that's not my first thought when I hear it. My brain bypasses the present and goes for the strength of what it was. It would make a great girl's name.