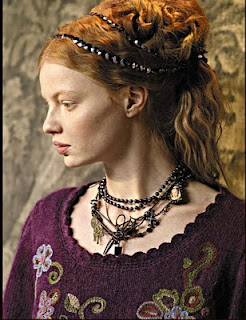 Nameberry recently released a list of baby names that have to do with the color purple. Here's one that they missed.

Violante (pronounced "vee-oh-LAHN-tay") is the variant form of Violanthe and it means "purple flower." Most sources state that it's Latin, but the "anthe" would suggest that it's Greek. It is a relative of other names like Violaine, Yolanda, Yolante, Jolantha, Viola, and Violet.

This name was bestowed on several Medieval princesses and children of nobility. Violante Beatrice of Bavaria was the Grand Princess of Tuscany. She was appointed the Governor of Siena after the death of her husband. Violante Visconti was the daughter of the Lord of Milan and Pavia, and she had very bad luck with marriage. She was betrothed three times (the first was to the third son of King Edward III of England, Lionel of Antwerp) and they all died within two years of the wedding. Violant of Bar was an Iberian (Spanish and Portuguese) Queen who gave birth to six children. But only her daughter, Yolande of Aragon, survived childhood and wound up playing an important role in the Hundred Years War: she financed Joan of Arc's army.

This name also has artist cred. Sor Violante de Ceo was a celebrated poet from Lisbon, Portugal. Violante Beatrice Siries was an Italian painter. "Violante" is also the name of a portrait supposedly by Italian Renaissance artist Titian.

More recently, this is the name of Italian actress and singer Violante Placido. (Two of my most favorite names on one person? What madness is this?) I bring that up because, even though she is not exactly a household name in the United States, she did pose for some revealing pictures for a magazine. That would make the name off-limits according to some. I say so what? You know, as much as I love America, there are time when I think I was born in the wrong country. I think people need to lighten up when it comes to breasts. I've seen photos of her. She looks beautiful and the photos are tastefully done. We're not talking about porn here. And let's not forget that breasts in advertising is nothing out of the ordinary in her native Italy.

Viola may be ripe for a revival, but Violante will probably remain an unusual name in the United States for the time being. Some believe that it sounds too much like "violent," and while I can see that for the variant Violant I think it's reaching for Violante. My only real issue with it is that it is a little bit long, which I think makes it more difficult to pair with a middle name. But that's just my personal aesthetic.

Violante is one of my favorites, although I also love Viola and Violaine. It's hard to pick just one. Pronunciation might be a little tricky, but if you have a passing familiarity with Italian or even Spanish pronunciation it's not that difficult. So if it never becomes popular, more for us unique name lovers I guess.