A Name for the Son of Tanya H. 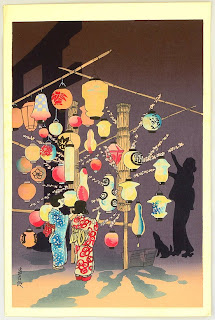 A Bewitching Names first is upon us! I've been called upon to help a couple name an impending child! This is exciting! This post turned out to be longer than War and Peace, so grab a snack and stay a while.

Tanya H. is looking for a name for her third child, second son. The father is half Japanese and would like all of his children to have Japanese names. That is not as important to Tanya, but she wants all the sibling's names to "go together." Some of Tanya's favorite names featured on this website include Kitsune, Ryu, Thor, Nokomis, and Mars. The child will have his father's Japanese (or at least it looks Japanese) surname that begins with an S, but the other two children have blond hair and blue eyes. Other concerns that Tanya has is, as much as she loves unique names she doesn't want one that is "too much" or pigeonholes her son into a hyper masculine personality. Their other two children are named Ahmi Moon and Ronin Summit (which are both fantastic, by the way) but they are completely lost finding a name for the third child.

First off, you'd be surprised how many "second son" names there can be in one language. Perhaps they're a bit obvious, but its worth taking a look at them anyway:

As nice as those are (and I'm not knocking them) there are many creative options from the Japanese language. Take my possible cons with a grain of salt if you like. If it doesn't matter to either of you, then it doesn't matter.

Baku. If you like Kitsune, you might like Baku. In Japanese mythology, a Baku is a friendly demon that eats nightmares. Possible con: It could sound too much like the Japanese word for "stupid:" baka.
Botan. "Peony."
Daisuke. "Great helper."
Genji. "One thousand." Name of the hero in the first novel ever written: The Tale of Genji.
Gitsune. Kitsune might sound overwhelmingly feminine. How about Gitsune? Kuda-Gitsune are mythical tiny fox-like creatures that are used for sorcery.
Goro. Love this sound for you! Possible con: It means "fifth son."
Hachi. "Eight." Might bring the famous dog Hachiko to mind.
Haku. Are you a Studio Ghibli fan? Then you'll like Haku. In Spirited Away, he is the mysterious shape shifting boy/dragon who's name was taken away from him. Spoiler: it turns out his name is Kohaku, which means "amber."
Haru. "Spring" or "clear."
Hideo. "Excellent man."
Hiro. "Abundant," "tolerant," and "generous." And yes, it's a homonym with the other name Hero.
Iori. Not sure on the meaning, but I know it's the surname of a Japanese swordsman from the 1600s.
Isao. "Honor" or "merit."
Jishin. "Earthquake." Possible con: The association of Japan + earthquakes.
Kai. Currently well used in the United States, this multicultural name means "ocean" in Japanese.
Kazan. "Volcano."
Kenshin. "Modest truth."
Kin. "Gold." In English, Kin means "family" or "friend."
Kirin/Qilin: If you like Kitsune, you might like Kirin. Kirin is the Japanese form of the Chinese Qilin. A qilin is part dragon, part ox, and they are often called "Chinese Unicorns." Possible con: It sounds and looks a lot like Karen or Kristin.
Kyo. If you like Ryu, you might like Kyo. It means "apricot," "village," "capital," "cooperation."
Noa. "From love." A multicultural name, it is also a popular Hawaiian name meaning "freedom." Yes, it's a homonym for the other name Noah.
Mako. Very popular for girls in Japan (thanks a lot, Princess Mako), but it is unisex. This is the name of an Academy Award winning actor who lent his voice acting for the beloved character Iroh in the television show Avatar: The Last Airbender, but died before the third season. For the sequel The Legend of Korra, they gave this name to a prominent character in his honor. I believe Mako means "sincerity." Brings the mako shark to mind.
Oboro. A name that pops up a lot in anime and manga. It was also the name of a few combat ships used during World War II. I can't for the life of me find it's meaning.
Onsen. "Hot spring."
Ren. One of the most popular boys names in Japan in 2010, it means "lotus" or "love."
Ringo. A unisex name meaning "apple." Possible con: The Beatles.
Tatsuo. "Dragon man," "imperial man," and "far reaching man." Possible con: Tatsuo is the name of a prominent character in the legendary film Akira. I can't imagine that being a practical problem, but if you're familiar with Tatuo's fate in the film I can see how it could be off putting.
Tengu. If you like Kitsune, you might like Tengu. In Japanese mythology, Tengu are shape-shifting spirits that can look like humans or large, monstrous birds. Oddly, Tengu means "heavenly dogs."
Yogi. This multicultural name refers to someone that practices yoga. Possible con: Bears and baseball.
Yoshi/Yoshio. "Happy" or "good." Possible con: Remember Mario's pet dragon?
Zen.

Here are some more that are not Japanese but could still work considering the sibling's names and the other types of names Tanya likes (I have to admit that I found this a little more difficult):

And here are some middle name possibilities that should keep a hippy mom happy:

Well Tanya H., I hope this helps you out. I would love to know what you two ultimately pick regardless of whether you use any of these. If any readers have extra ideas, let me know in the comments.