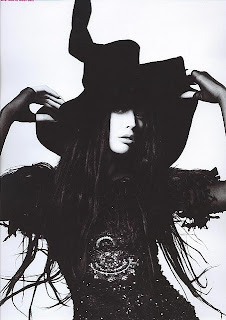 Blessed Samhain everyone! Even though I just learned that Samhain is technically tomorrow. But that's cool, because then it's possible to celebrate Halloween on October 31st, Samhain on November 1st, and Dia de los Muertos on November 2nd! Together they can be the Hallows! And I hope everyone in the southern hemisphere is having a Blessed Beltane!

Today, this word is mostly used in reference to the holiday of Halloween and Hallowmas. Hallow is another word for "saints," which makes sense considering that Hallowmas is more commonly called All Saints Day. This name definitely has a Christian tinge, as the word is mentioned in the beginning of The Lord's Prayer.

I have mentioned this name once before, it was second runner up in my Pagan Name of the Year contest last year because of the Deathly Hallows movie. In the book, the Hallows are three magical objects: the Elder Wand, The Cloak of Invisibility, and the Resurrection Stone. In real life, hallow is another term for a holy relic that could be either Christian or Pagan, real or legendary. The Holy Grail is considered to be a hallow. So are the Four Treasures of Ireland: the Spear of Lugh, Stone of Fal, Dagda's Cauldron, and the Sword of Light. In modern times, some Neo-Pagans believe that the four suits of a traditional tarot card deck (swords, wands, pentacles, and cups) are hallows.

Hallow has never been a common name in the United States. But I think names like Haven, Heaven, and Harlow lead the way to Hallow very easily. It does sound a lot like hollow, which could put people off. But I think that's a silly reason to discount it completely.

Halloween might be a bit much for a name, but Hallow would work perfectly.