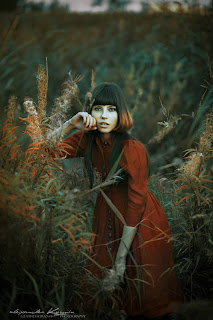 As it turns out, the stone for Aquarius is also the "official" birthstone for January. So you get the best of both worlds today.

The name Garnet (pronounced "GAHR-net") could come from the English gernet, meaning "dark red," or from the Latin granatus, meaning "grain." The last meaning could be referencing pomegranate seeds, which have a similar color and shape to the gemstone. Garnets are mostly known for having a very deep, dark red color. But they come in a variety of other colors as well including green, orange, yellow, and brown.

Garnets are found all over the world, but they are particularly abundant in East Africa, Australia, parts of Europe, and South America. They were the most commonly used gemstone late in the Roman era. Artisans used them as gemstone inlays for sword hilts and jewelry. Garnet sand is a good abrasive, and is often turned into sand paper and used in water filtration systems.

This gemstone has been used for a number of magickal purposes as well. Because the deep red this stone is known for is reminiscent of the color of menstrual blood, it's associated with fertility. Women would sometimes wear it around their waist to help their cycle. The garnet is believed to draw happiness, peace, patience, creativity, and sexuality. It's also used to revitalize the bloodstream. Garnets are believed to protect the wearer against thieves. It's said that whoever steals a garnet is cursed until they return the gemstone to it's rightful owner.

Garnet is a name that appeared on the American popularity charts for both boys and girls around the same time. In the 1910s, Garnet was ranked #428 for girls and #906 for boys. There was also a version of this name with an unnecessary added t at the end that was also most popular in the 1910s. Since it was popular in my Great-Grandmother's generation, it might sound fresh to new parents and be ready for a resurgence.

This name is somewhere in between Ruby and Topaz. It's a recognized name but it's not currently abundant. As far as I can tell it has no obvious nickname, so if you're not a fan of nicknames Garnet's a good option. It's also unisex in the best possible way. I wouldn't think, "Oh, they must have wanted a boy," if parents gave this name to their daughter. And I wouldn't worry about a son getting picked on. I love names that both genders can share happily.