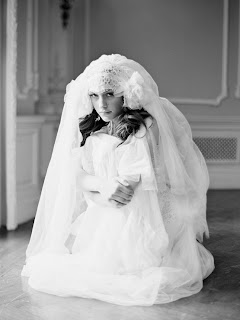 Merope Gaunt never appeared in the film adaptation of Harry Potter and the Half Blood Prince. And while I understand why, it wasn't a necessary scene anyway and it would have made the movie longer for no reason other than to satisfy completionists, I'm still a little sad because she is an interesting character. You see, Merope is Voldemort's mother.

Merope (pronounced either "MAIR-oh-pee" or "mer-OH-pee") is a Greek name with unknown meaning. Merope Gaunt is the daughter of Marvolo Gaunt and a descendant of Salazar Slytherin. The Gaunts were once a powerful wizarding family, but family abuse and cousin marriages led them into a life of squalor and violence. Merope falls in love with an aristocratic Muggle named Tom Riddle. It is suggested that she tricks him by using a love potion. They get married and Merope becomes pregnant withing three months. At this point she stops administering the potion hoping that Tom has grown to love her, but he abandons her. Heartbroken, she wonders through the streets of London. She gives birth to her son in a muggle orphanage, names the boy Tom Marvolo Riddle, and dies. The rest, as they say, is Harry Potter history.

Merope is a name that could be in reference to several heroines from Greek mythology. One Merope was forced to marry the murderer of her last husband and two older children. She manages to stow away her youngest son, Aepytus, and when he was grown he returned to take revenge. Another Merope is said to have brought wine making to Chios, and was assaulted by Orion when he had too much to drink. A Merope is also the adoptive mother of Oedipus.

But J.K. Rowling was most likely referring to the myth of the star Merope that is located withing the constellation Taurus. This Merope was once one of the Pleiades (nymphs) that accompanied Artemis. All of the Pleiades were turned into stars because Orion had fallen in love with them and was pursuing them. This transformation was made to keep them safe. Merope is the dimmest star because she is the only one to have married a mortal, and covers her face in shame.

Merope is also the genus that has only one species: the earwigfly. It lives throughout the east of North America from Ontario to Florida, and as west as Kansas. Not much is known about them, they're very secretive and like to stay away from humans.

Merope has an adorable sound, similar to Penelope. So for that reason I think it's pretty. It's just...look at all those stories. They all seem kind of negative, don't they? On the other hand, that doesn't stop anyone who loves Ophelia, me included. I would consider Merope to be a romantically dark name like Lenore. In fact, siblings named Lenore and Merope would be awesome. So in all, it makes a good selection for the gothic Harry Potter lover.