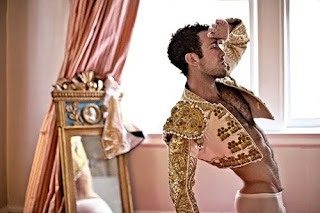 It's time for yet another astrological name, Taurus.

Taurus (pronounced "TAH-rus") is a Latin name meaning "bull." It is the root of the Spanish vocabulary word for "bull," toro. Other variations include Taurean, Taurino, Tauro, and Taurinus. The later was the name of a saint, who is well known for raising a girl back from the dead after she died in a fire.

Taurus is the second sign in the zodiac. The constellation was identified as a bull very long ago, some historians say even by the Paleolithic peoples who's cave drawings of bulls may be in reference to the constellation. The Ancient Babylonians and Egyptians also saw the bull.

In Greek mythology, Taurus is believed to be Zeus. As the story goes, Zeus was enamoured with a Phoenician woman named Europa. He once took a bull's form in order to blend into her father's herd. While picking flowers, Europa saw the pretty bull, went to pet it, and eventually climbed onto his back. The Zeus-bull took off towards the ocean and swam all the way to Crete with Europa on his back. Once they landed, Zeus revealed his true identity, and Europa became the first Queen of Crete.

Another explanation is that Taurus represents the mythical Cretan Bull. King Minos of Crete refused to sacrifice his favorite bull to Poseidon. Poseidon was pissed off, and decided to make King Minos' wife feel lust for the bull. The Queen made a wooden cow that she could wait in that would entice the bull to mate with her. This union created the Minotaur. How charming.

A person born under the sun sign of Taurus is tenacious and has great focus. They are very dependable and honest, and make great friends. On the flip side, they are also very stubborn and can hold a grudge for a long time. Also, their love for material things could make them a little petty.

So is Taurus a suitable name for a little boy? Sure. I would hold off on explaining the Minotaur connection, but it's a very strong name for a determined little boy.