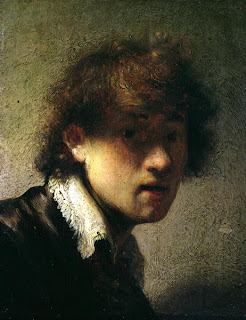 Every time someone compiles a list of names inspired by artists, I'm always surprised when Rembrandt isn't mentioned.

Rembrandt (pronounced "REM-brahnt") is a Germanic name composed of the elements ragin, meaning "advice," and brand, meaning "sword." A more lyrical interpretation of the name may be "sword wisdom." The name was primarily used by the Dutch.

The most famous namesake is artist Rembrandt Harmenszoon van Rijn, who often signed his work with his first name only. He is considered to be one of the greatest painters and print makers in European history. In his youth he achieved success as a portrait painter, and married his art dealer's cousin, a woman named Saskia. After that his personal life went downhill. Their first son, Rumbartus, died when he was two months old. Their first daughter, Cornelia, died at three weeks old. The second daughter, also named Cornelia, died after one month. And Saskia died after the birth of their fourth child, a boy named Titus. Titus lived to adulthood. Later, Rembrandt had a relationship with a maid named Hendrickje. They never married but they raised a child together named...Cornelia. This must have been his favorite girls name. Rembrandt had a problem with living beyond his means, and his later life was characterized by financial problems.

Rembrandt is renowned for blending the mundane and the spiritual in his work. He is especially praised for his narrative paintings, which mostly consisted of Biblical scenes, but occasionally included other stories like the abduction of Europa. The house he lived in was located in the Jewish quarter, and would use the neighbors as models.

There is more than one Rembrandt. There are two other artists with this name. Rembrandt Bugatti was an Italian sculptor and Rembrandt Peale was an American painter. A fictional character named Rembrandt Brown appeared in the television show Sliders. It's also the name of a dental cosmetic whitening product, but my first thought is still the artist.

Most everyone is familiar with this name. People are going to forget the silent "d" in the name, which wouldn't be incorrect. Originally, his name was spelled Rembrant and that's how he signed it. But otherwise, Rembrandt seems like an excellent option. It falls in line with Monet and Kahlo. It would be awesome if more people considered this name.