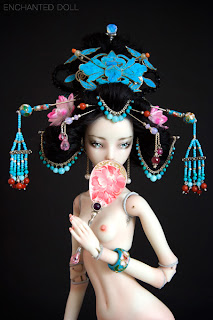 Continuing on with our top 500 most popular names theme, today we will cover the Wicca-lite but still exotic name Jade.

I've read that one baby name book listed the meaning of Jade as "priceless one." Whoever wrote that book is an idiot. Jade (pronounced JAYD), also sometimes spelled jaid or jadeite, is an Old French word derived from the Spanish term piedra de ijada, meaning "loin stone." This name comes from the belief that jades could help heal ailments of the loins or kidneys. In some countries, this gem is simply known by a more unimaginative name: "greenstone." As that name would suggest, jade is most well known for being green. However, they can also come in a creamy white, blue, lavender, and pink.

When I think of jade, the culture that pops into my head immediately is Ancient China. They have been mining jade since 6000 BC. The importance of jade in this culture is comparable to gold or diamonds in Western cultures. They were used to make both ceremonial and utilitarian objects. The Chinese thought this stone would give them inspiration and quickness of mind, as well as purity and serenity. There are also many references to jade being a symbol of love. It's an old Chinese tradition for a prospective bride to give her betrothed a gift of a jade butterfly in order to seal their engagement. Then, the prospective groom would give her a gift made from jade before the wedding. The stone was also highly esteemed by the Maori's of New Zealand. To this day, jade in New Zealand is protected under the Treaty of Waitangi, which means that it's exploitation is strictly monitored. Jade artifacts have also been found in Ancient Mayan cities.

Aside from curing ailments of the loins, this gem is believed to have other magickal abilities. Some people wear jade in the belief that it will help the body heal itself while working on underlining problems that cause disease in the first place. Many ancient cultures thought that jade helped heal eye ailments. Wearing jade while gardening supposedly improves the health of the plants.

Personally, I like Jade a lot. I would like it a little better if it wasn't so popular, but that's just my tastes acting up. Jade certainly has witchy appeal, but it is very integrated into "muggle" culture. Unless, of course, you give it to a boy.