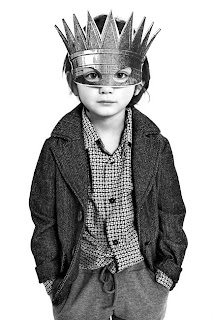 Like many Wicca-lite names, Arthur seems normal enough but has a long history.

But a theory that has been gaining a following amongst scholars is that Arthur comes from the stars. Thy hypothesis is that Arthur is derived from Arcturus, which is the name of the brightest star in the constellation Bootes, which is near Ursa Major (the "Great Bear"). Arcturus is the Latin form of the Greek Arktouros, meaning "guardian of the bear."

The most famous namesake is King Arthur from Arthurian legend, who presided over the Knights of the Round Table. Some believe that King Arthur is based on a real person who lived sometime in the 5th or 6th century. According to Medieval texts, he is responsible for defending Britain against the Saxons. His story varies widely from text to text, so it's hard to pin down historical facts. Most of what we know of King Arthur comes from Geoffrey of Monmouth's Historia Regum Britanniae, a fanciful book published in the 1100s. This book introduced many of the key characters and plot points that we now recognize: his father Uther Pendragon, his wife Guinevere, Merlin the wizard, his sword Excalibur, his final battle with Mordred, and his final rest in Avalon. No matter what the history is, King Arthur is a very popular icon. He has long been associated with idealistic qualities like chivalry and purity.

The name Arthur came into general use during the Middle Ages when Arthurian romances became popular. It also enjoyed a surge of popularity in the 1800s due to the Duke of Wellington Arthur Wellesley, who is credited with vanquishing Napoleon. Therefore, there are a lot of namesakes for Arthur, and it's even a popular name for English royalty. But one namesake is particularly important for Neo-Pagan culture: Arthur Miller.

The year after the last of King James I's Witchcraft Acts were being repealed in England, Arthur Miller's stage drama The Crucible premiered on Broadway in 1952. The play is a not-historically-accurate portrayal of the Salem Witch Trials. Of course, The Crucible is not really about the Salem Witch Trials. It was meant to draw a parallel between that time period and McCarthyism, which would have been going strong at the time. The initial reception for the play ranged from mixed reviews from people who believed that it didn't live up to his earlier work Death of a Salesman, to downright hostility. A few years after, Miller himself was questioned by the House of Representatives Committee on Un-American Activities. Nevertheless, the The Crucible won a Tony Award for Best Play, and became a classic. Some Neo-Pagans believe that without this play, the Neo-Pagan movement would have a harder time achieving what would come later. The Crucible helped people see what the Salem Witch Trials for what it was, hysteria gone out of control.

Arthur is a sweet, noble boy's name. There are a few Neo-Pagans with this name, but I'm not sure if it's their magickal names that they chose themselves or the names that they're born with. But it doesn't really matter. Arthur effortlessly belongs to both the magickal and the mundane.