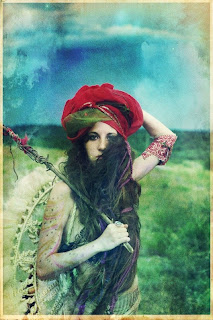 Some people might think that using this name is completely bonkers, but I don't think that it's out of the question.

For some reason I assumed that this word was Greek. It looks like it could be Greek, doesn't it? But Calico (pronounced "KAL-ih-koh") is actually a corruption of the place name Calicut. Calicut was the European name for the Indian city of Kozhikode, which was a very popular port town during the 1000s right up to the 1900s.

This city made a particular type of fabric that was popular with the British for a long time. Calico fabric is basically cheaper, unbleached, unprocessed cotton. It usually has a cream background and was dyed with a small, all-over floral print. It's worth noting that Americans use the term more for that type of print than for the actual fabric. The fact that the cloth was traditionally manufactured in India for the use of the English will probably make the name off-putting for some people, assuming you know India's history with the English. But that's not really the biggest problem that people have with Calico.

The biggest problem most people have with using Calico as a name is that it's associated with cats. Or to be more specific, cats that are white with black and orange spots. That wasn't always the case. In terms of animals, the word was originally used to describe the coloring of horses. It also refers to a type of butterfly and a type of crab. But it's the cat thing that's going to get to people.

Calico cats are very pretty. There is also a coloring called the diluted calico, which is white with grey and golden spots. They are also very pretty. Most myths surrounding this type of cat are positive, and they are considered to be lucky in many cultures. They are sometimes referred to as "money cats" in the United States. The breed Japanese Bobtail, and by extension the famous Maneki Neko figurines, are almost always calico cats. And, well, we all know about Witches and their cats. An association with them is not likely to be seen as a negative.

I think Calico is cool. It fits in with other "-o" names that are experiencing more use today. Fabric names have been used in the past, although none of them have been particularly popular (think Velvet or Cotton). And it has a similarity to Chloe, which is quite popular. So I like Calico and would love to see someone use it.