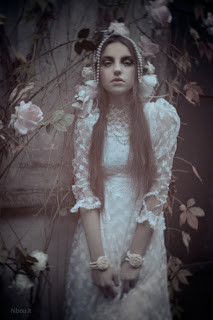 Well, I would like to thank Cotton Mather for making this name completely unusable for any Neo-Pagan in the foreseeable future, you fool!

Cotton Mather was a Puritan minister well known for his role in the Salem Witch Trials. He was named after one of his grandfathers, who's name was John Cotton. Some historians believe that he caused the hysteria in Salem by publishing books that encouraged witch hunting. He was obsessed with catching witches or "curing" them, and stated that anyone against the witch trials were witch advocates. On the other hand, he did encourage people to get inoculated against smallpox. Good, but not good enough for the Witchy community, Mather. And it's not like he's an unknown historical figure. Most Americans have a passing familiarity with this man. At the very least, they know that Cotton is a Puritan boys name.

It's a shame really, because Cotton could be a sweet nature name in the same vein as Clover and Saffron. Cotton is ultimately derived from the Arabic qutn, which might have came from an Ancient Egyptian word. The meaning is unknown as far as I can tell. Cotton is also a verb meaning, "to get along with," but this use must be very old because I've never heard of it.

The cotton plant is originally from tropical and subtropical areas like Mexico, Africa, the Middle East, and India. I have distinct memories of cotton floating in the air when I was a child in Connecticut, which is not very tropical. So clearly the plant has moved beyond those regions. Different species were cultivated independently in both the Old World and the New World. One hilarious story involves the import of cotton to Northern Europe during the Middle Ages. They had no knowledge of how it was made other than it coming from a plant, so they concluded that they must have come from a plant-borne species of sheep.

This plant has been used to make fabric since prehistoric times. This fabric comes from the fibers that surround cotton seeds, which are harvested and spun into thread. The United States had been the number one exporter of cotton for years, but recently that honor had been usurped by China. I've seen cotton advertised as the eco-friendly fabric. That's slightly misleading. Cotton farms are known for having a particularly high pesticide rate, so check to see what the companies harvesting practices are first. In addition to fabrics, cotton is also used to make fishing nets, coffee filters, cottonseed oil, gunpowder, and paper. In the American slavery times, cotton bark was used as a folk remedy to induce a miscarriage.

If you don't think about the past bearer, this name has a gentle, rustic feel to it. Only time will tell of Cotton's reputation could be reinvented and given to children without a bad aftertaste. You're welcome to give it a try.