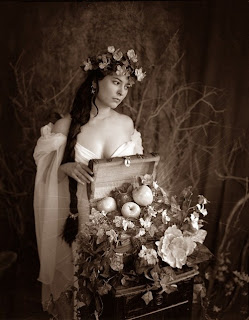 Blessed Mabon to my fellows in the north hemisphere, Blessed Ostara to those in the south! Mabon is the festival of the fruit harvest. In honor of the season, let's take a look at the goddess of fruit.

Pomona (pronounced "poh-MOHN-ah") is a Latin name derived from pomum, meaning "fruit." This is where the French word for apple comes from, pomme, and by extension many other names like Pomeline and Pomeroy. It is the name of a Roman goddess that symbolizes the autumn season.

Pomona is often depicted as a beautiful young woman with either branches of fruit trees or with a cornucopia, or "horn of plenty," which is fitting since she is the goddess of abundance. Although she is worshipped as a goddess, she is said to be a wood nymph. Specifically she is one of the Numia, a group of guardian spirits that watch over and protect people and their homes. Although she loved all fruit, apples are by far her favorite. She must have been very important in Ancient Roman culture because she had her own priests. There is a grove of hers that still exists called the Pomonal. It's located not far from Ostia, Italy.

If her name sounds slightly familiar, that might be because I've mentioned her before when I profiled Vertumnus. She was beloved by woodland gods like Silvanus and Picus, but Pomona was determined to remain a virgin and locked herself away in her orchard. Vertumnus was in love with her and seduced her. Like Vertumnus, Pomona does not have a Greek counterpart. It is likely that she is based on an earlier Italian goddess.

Pomona has never been a popular name in the United States. There are not that many human namesakes either. Harry Potter fans will recognize this name because of Pomona Sprout, head of the Hufflepuff house and the herbology professor. But that's really it. I must confess that I like Pomeline slightly better. And I love Pomeroy too. Some people believe it has a sissy image. I dont' see it.

I think that Pomona deserves more use. It's beautiful, has a friendly goddess attached to it, and I get a very cheerful vibe from it. If you're particularly in love with the autumn season, Pomona is a good choice for you.