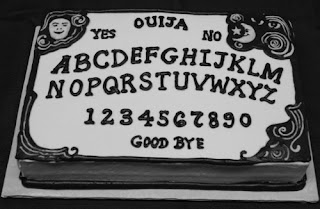 Two years ago I started writing this blog! Isn't that something! And the readership has been steadily growing! Thanks to you all!

I don't have a photo of myself at the age of two for you as I have moved since last year and I don't have many baby pictures of myself on my computer. Oh well. Here's a picture of a witchy cake.

Here's something that I would like to gage your level of interest on. I don't know if you've noticed, but posts this year have been slightly...sparse? At least in comparison to the year before. So I'm thinking of doing a name round-up every week or so. A Thursday Thirteen, if you will. They would be easy to make, I would just need some ideas for topics. So if you have any ideas for name round ups please leave a comment in the request page.

Let's take a look at how this blog's been doing in the past two years:

Website that sent the most viewers my way: Google, but after that Appellation Mountain.

Search term that brings the most viewers: "Bewitching Names," obviously.

Countries that view this blog the most (highest page views to lowest):

My favorite posts: Well I never heard back from the mother, but I have to say that Tanya H's name consultation was my favorite to write this year. As for the most favorite post of all time, I have to say I was blindsided by the positive response that the Chinese Orphans post got, seeing as I typed it out in a hurry before work.

My least favorite posts: Anything that I write that deals mainly with my opinions and feelings is hard. In fact, I just took two of them off this blog because I am planning to rewrite them. I don't feel like I thought them through very well the first time so I hope I can make them better.

Notes on Pagan Name of the Month:

Well, no notes really except C'MON, NOMINATE SOME MORE NAMES ALREADY! Baby Name Wizard had some problems with their Name of the Year contest too, so maybe it just wasn't a "namey" year. I'll be willing to lengthen the nomination time to Christmas so that you have a few more days anyway. So...nominating a name would be a nice birthday present for the blog. Just saying.