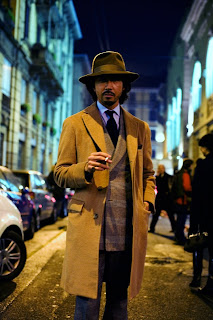 I almost completely forgot about this other witchy character from Studio Ghibli. Continuing on with the party, I have something quintessentially Japanese for you.

Fujimoto (pronounced "foo-jee-moo-toh") is a Japanese name meaning "under the wisteria." It's usually used as a family name. It comes from the Fujiwara clan. Fujiwara means "wisteria plain," and the clan was a very important one in Japanese history. The clan's founder was Nakatomi no Kamatari, a statesman who helped place Emperor Tenji on the throne. The Emperor gave him the new surname, Fujiwara, as a gift of thanks.

In Hayao Miyazaki's Ponyo, Fujimoto is a sorcerer who gave up his human life in order to protect the balance of the oceans. He somehow managed to win the love of the goddess of mercy, who also lives in the oceans, and made many half-human, half-fish daughters. The most precocious and gifted of his children is Brunhilde. While he takes them out for an outing, Brunhilde runs away. She is found on the sea shore by a little boy named Sosoke, who names the fish Ponyo. Ponyo falls in love with Sosoke, but is quickly brought back home by her unamused father.

Fujimoto doesn't want his daughter to have anything to do with humans because, "They treat the oceans like their empty, black souls." Well, we kinda do. The oceans are in a deplorable state environmentally. Anyway, he intends to use elixirs to create a surge of ocean life that will put an end to humans. Ponyo makes a mess of that when she runs away a second time, and lets animals into the elixir storage too quickly. The oceans become completely off balance, and Fujimoto, along with the the goddess of mercy, have to set it right.

It would be difficult to separate this name from it's Japanese heritage. Therefore I would expect someone with this name to have Japanese blood somewhere. A Dutch person named Fujimoto would be interesting, but at the same time I'd be scratching my head.

In any case, Fujimoto is a great name for those that love the land of the rising sun. I see it as being a boys name, but since it's a surname it's open for either gender. Could be an exotic option for Neo-Pagan folks.