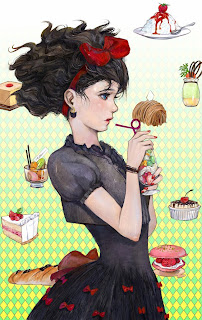 I think we can just go ahead and put all Hayao Miyazaki movies into the Pagan-family-friendly category. Continuing on with our fictional Witches, this post was inspired by the Witch in Kiki's Delivery Service.

In the story, Kiki (pronounced "KEE-kee") comes from a family of Witches. Kiki reaches the age of 13. According to family tradition, that means that she must leave her home and live on her own for one year. So Kiki takes off for the big city along with her talking cat Jiji. She's really good at flying, so she starts a delivery service in order to earn money. She runs through a few rough patches and must learn to overcome her own insecurity. That might sound trite, but as we all know it's not what you do, it's how you do it.

This is another story that Miyazaki did not come up with himself. It's loosely based on the children's novel of the same name by Eiko Kadono. It is available in English, although you might have a hard time getting it. It's out of print.

Kiki is a name of many cultures. It's used on it's own in Japan, although as far as I can tell it's not a traditional Japanese name. In Korean it means "lovely flower." It's also listed as an Egyptian name, meaning "from the castor plant." But most of the time, in the Western world anyway, it's used as a nickname. Sources list Kiki as a nickname for the Spanish Enriquetta (and Enrique). Kiki is also a Scandinavian nickname for Kristina. Both of those make sense. However, it's also listed as a French nickname for Magali. I don't see how you can logically make that leap, but there it is.

Kiki has an artsy, bohemian air about it. Most of it's namesakes are creative people. Kiki also looks like she could hang out with Fifi, Mimi, and Bebe. That sounds like a group of beatniks dressed all in black with berets discussing their poetry. Or a group of poodles.

Kiki sounds like a name that should be very common, but it isn't. It actually has never charted at all in the United States. It could be a new alternative for the once-overly-popular Kristy. It's a very cute name, short and sweet. And with a namesake from Kiki's Delivery Service, how can you go wrong?