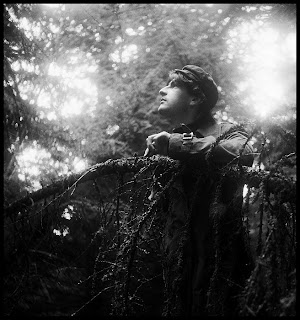 I've made a point to profile some famous Neo-Pagans here: Gardner, Laveau, Sybil. But after being in the Craft for a while, you might be curious to know what other well-known Neo-Pagans there are besides Witches and Priests. So here's one you might be surprised by: William Butler Yeats.

You might know William Butler Yeats as a famous Nobel Prize winning Irish poet and dramatist, the first Irish writer to be awarded the Nobel Prize. He also had a life long interest in Hinduism, Mysticism, and the Occult, which influenced much of his work. This interest started when he was very young. He was enchanted by Irish myths and legends. He once said, "The mystical life is the centre of all that I do and all that I think and all that I write." His belief system later evolved into something much more tame, but he was still interested in the cyclical nature of life.

William Butler Yeats might be near-worshiped in Ireland, but his name is not of Irish origin. Yeats (pronounced "YAYTS") is a variation of Yates, which is a Middle English name meaning "gates."

Well, you might be thinking that this is interesting and all, but is Yeats "namey" enough for a person? The answer is yes, if you like surnames as first names. This name would appeal to those that like Oates, Keats, Foster, Griffin, and Graham. In all the sources I looked at Yeats is listed as a boy's name, and that's how I prefer it. But with today's naming trends it wouldn't surprise me to see it on a girl.

When confronted with a baby Yeats, others will not necessarily think about the occult. But they might think that the parents are literature teachers. So if you're going to use this name, it might be a good idea to actually read some of his poetry. In any case, Yeats is an interesting choice for the bookish Witch.

I'm participating in the Pagan Culture Blogoversery Party! What does that mean for you? Well it means that starting April 13th through May 1st, Bewitching names will be devoted to the names of fictional witches! So look out for it, and feel free to make requests for name profiles!

I also very quickly changed the look of the blog. It's a very generic template, but I like it much better now.