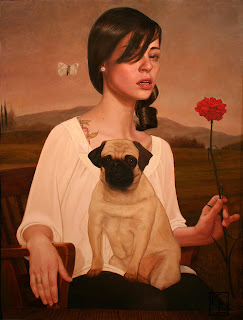 This is one of my favorite unisex names. That's right, unisex.

Juniper (pronounced "JOO-nih-per") is derived from the Latin juniperus. Junio means "young," and parere means "to produce." Hence it means "producing youth," bestowed on this plant because it's coniferous and doesn't seem to age. It is also believed that Juniper is a variant of the Welsh name Guinevere, but some might argue that. The Juniper tree grows from the Artic all the way to tropical Africa, and in Central America.

This plant has many mythical associations. The Druids would mix the berries with thyme to make incense used to stir visions. It is also believed that planting a juniper tree by your front door will discourage thieves and that stringing mature berries in your home will attract love. The spirit of the juniper tree is named Frau Wachholder, and she was often invoked to make thieves return stolen goods. In Ancient Wales, this tree was sacred and it was believed that chopping one down would bring the cutter's death a year later. It's mentioned several times in the Bible as a benevolent object, and was used as a symbol of chastity in Renaissance art. In the Grimm brother's fairy tale "The Juniper Tree," a woman magically becomes the spirit of the tree and a bird living in it after her body is buried beneath it. She avenges the death of her son while in her bird form, dropping a millstone on her son's stepmother.

This plant has many practical applications as well. Native Americans, particularly the Navajo, have long been using it as a treatment for diabetes which is under clinical testing today. Many prehistoric peoples lived in juniper forests which provided them with food, fuel, and shelter. The berries are used to spice up culinary dishes and are well known for being the primary flavoring in gin ("gin" is a shortened version of genever, the Dutch name for this plant). In Asia, it's a popular species to use for bonsai trees.

The gender police is going to have a hard time convincing me that this name should only be used for girls. Originally, Juniper was a boy's name. Girls would have more commonly been named Geneva, Genevieve, or Ginevra which are all considered variants. And there are tons of well known masculine namesakes.

Saint Juniper was a friend of Saint Francis. That would make him a Franciscan, which is arguably about as Pagan as you can be while still being Christian. Saint Juniper was known for his sense of humor and is sometimes called the patron Saint of comedy. He was also known for his patience, and was described by Saint Francis as the perfect Friar. Another Friar named Junipero ("who-NIP-eh-roh") Serra is also very well known. I first found his name because the church that he preached in was very close to the town where I was born! Unfortunately, he is well known for not being particularly nice to the local Native American population, which does not make him a very good namesake for a Neo-Pagan family.

Other namesakes include Juniper Sage, the pen name of Margaret Wise Brown, and Juniper Shuey, a male contemporary artist. There is a character called Brother Juniper in both the novel The Bridge of San Luis Rey by Thorton Wilder, and in the comic strip of the same name by Fred McCarthy. As for the girls, there is the children's book series Junie B Jones by Barbara Park, the cartoon series The Life and Times of Juniper Lee, and the character of Joon in the movie Benny & Joon. Juniper also shows up as a surname, as Tony Juniper is a well known environmentalist.

In order for this name to be "taken" by the girls, it would have to be bestowed on a significant number of girls. But it hasn't. Juniper has never been in the top 1,000 for either gender. So it is still very much for grabs. Nicknames include Ginny, Jenny, Juno, June, or Nipper. I would like to see this name used more for any sex. Juniper is just so happy, free and nonconformist.

Image Credit:
http://weheartit.com
Posted by Isadora Vega at 12:12 AM