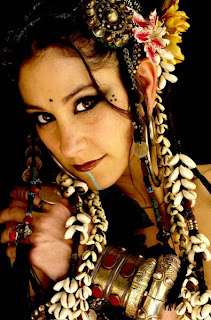 Here's an exotic and familiar name that is not really used that often.

Sheba (pronounced "SHEE-bah") is a Hebrew name meaning "promise." It's sometimes used as a nickname for Bathsheba, but could also be used on it's own. Sheba is the name of a kingdom mentioned in the Old Testament. The kingdom could have been located in what is now Yemen, Ethiopia, or both.

So according to the story, the Queen of Sheba heard of the great wisdom of King Solomon of Israel and decides to meet him. Despite cultural beliefs to the contrary, there is no romance suggested between the two. At least not in the Jewish account. And yet many different royal families have claimed that they are descendants of Solomon and the Queen of Sheba.

Sheba is also the name of an important if somewhat controversial figure in Neo-Pagan history. Lady Sheba (born Jessie Wicker Bell) was born in 1920 in Kentucky. She had Irish and Native American heritage, and claimed to be descendant of seven generations of practitioners. She was introduced to the Craft at the age of six. Her grandmother taught her Irish faery lore and about the spirit guides of the Cherokee. When she was a teenager, she was initiated into a coven and took the magickal name of Lady Sheba. According to her, she could recall her past lives and this was her name in one of them.

As the years went by, she got married and divided her religious duties with raising her four sons and four daughters. Her coven eventually adopted influences from Wicca and British Traditional Witchcraft as they began to spread throughout the United States. Lady Sheba founded the American Order of the Brotherhood of the Wicca, in order for Neo-Pagans of all traditions to work together.

The reason Lady Sheba is controversial is because she was the first person to publish her book of shadows in the 1970s. A book of shadows, or a grimoire, is a Witch's personal book of spells and rituals, kind of like a religious diary. Lady Sheba claimed that the Goddess instructed her to publish her book of shadows for the benefit of the people. Nowadays, it seems like everyone and their mothers are publishing their book of shadows, but Neo-Pagans were still very secretive at the time. If you know anything about how traditional covens work, then you know that you have to take an oath not to talk about what is discussed in the sacred circle to anyone not in the coven. So a lot of Neo-Pagans felt betrayed. The criticism got so bad that Lady Sheba withdrew from the public eye altogether. But the book is still widely published, under the name The Grimiore of Lady Sheba, and very important today.

For the longest time, Sheba meant "cat" to me. I remember looking at photos of my mother as a little girl and there was a chocolate-point siamese cat in some of them. When I asked my mother about it, she said, "Oh, that's Sheba." But since I've never met the cat, I've gotten past that association. I'm not so sure my mother has, but that's her problem.

The more I say the name aloud, the more I like it. Sheba is a beautiful name that is Jewish/Christian/Islamic and Neo-Pagan. It's very exotic sounding but at the same time is not that different for Sheila or Susanna. It's a cute name for a little girl that will grow womanly as she becomes a woman.

Image Credit:
I don't remember.
Posted by Isadora Vega at 11:09 AM