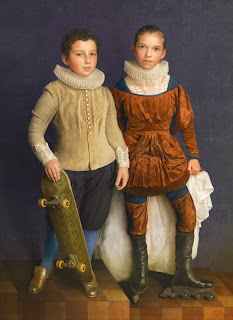 I wonder if American parents would give this name a chance.

Percival (pronounced (PUR-si-vahl") is an invented name based on existing names. Percival first appeared as one of King Arthur's knights in the poem "Percival, the Story of the Grail" by Chretien de Troyes. The character and his name is based on the earlier Welsh hero Peredur, who's moniker means "hard spears." The new spelling was possibly influenced by the Old French percer val, "to pierce a valley."

In the story, Percival is of noble birth, although the name of his father changes with each retelling. His mother is usually unnamed, but plays a big part in his life. After his father dies, his mother takes him to live in the forests of Wales, untouched by the influence of men until he reaches the age of 15. When he watches some knights pass by through the forest, he is struck by how cool they look. He decides that he wants to be a knight himself, and travels to King Arthur's court. He is invited to join the Knights of the Round Table after he proves that he's a worthy warrior.

The character is most notable for his connection to the Holy Grail. He meets the crippled Fisher King and spots the Grail, but doesn't recognize that it is "the" sacred Grail. He fails to answer the question that would have healed the King. Once he realized his mistake, he vows to find the grail again and fulfil his quest. In the original story, that's where it ends. It has since been continued by many other writers. Some versions say that after he heals the Fisher King, Percival becomes a King himself and marries a woman named Blanchefleur. Others say that Percival died a virgin after completing his task, the poor sod. In a common version, Galahad is actually the hero of this story, who finds the Grail with Percival's assistance.

In America, the name peaked in the 1880s at #843, which is pretty mild popularity. It doesn't even seem to be all that popular in England or Wales. It looks like it's more common as a surname than as a given name (meaning that there might be female Percivals in the future? That's kind of an interesting thought). There are not many real-life namesakes that have Percival as a first name, but there are a few fictional ones. Dr. Cox from the television show Scrubs has it as a first name. There is also Percival "Percy" Weasley, Ron's stuck-up older brother, from the Harry Potter world.

When I was younger, I thought that Percival was effeminate, stuffy, and very British. My opinion was probably influenced by the pug in Disney's Pocahontas. But you know, I'm starting to like Percival. Percy, not so much. And it'll be kind of hard to avoid the name's most common nickname. So maybe that's why people aren't using it so much in the United States.

It's not for everyone, but Percival is a dignified name that gives the impression of nobility. I'll be interested to see when, and how, Percival resurfaces into the namescape.

You might have noticed that there is now a master list for the girls names (a.k.a. The Maidens) featured on this site. The boys and unisex lists are coming. Hopefully, this will make it easier to find names as the website gets more and more profiles.

I have to give props to Abby on Appellation Mountain, who did this when her site had a lot more names than mine. It's much more time consuming than it looks. I was thinking, "Oh yeah, I can totally knock off all three pages in one night!" and, well, um, no.