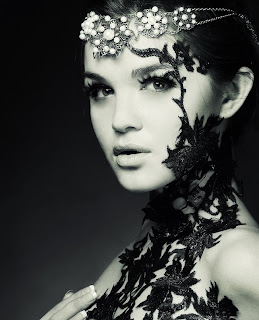 I have to admit, I was surprised to see that Desire was used as a girls names by the Pilgrims. There was one aboard the Mayflower. I'm not quite sure what this name it supposed to suggest. Maybe a desire to be closer to God? That seems likely.

But let's look at the word's history. Desire is ultimately derived from the Latin phrase de sidere, meaning "from the stars." This suggests that the original meaning of "desiring" was "awaiting what the stars will bring." This gradually evolved into "wishing," "longing," or "expecting." It wasn't used as a synonym for "lust" until the 1300s, but that's still early enough for the Puritans in America to be familiar with it.

So have we ever heard of this name anywhere else? In comic book land, yes. Desire is one of the seven Endless (god-like creatures) in the Sandman series by Neil Gaiman. Desire is a strikingly beautiful character whose gender is mutable because he/she represents all that someone could desire. He/She is often referred to as "sister-brother" by the other Endless. He/She is the cruelest of all the Endless and is obsessed with causing trouble within the family. He/She is as fickle and self centered as the emotion itself.

A French variation (or, at least, a Frenchified variation) of Desire have been given to daughters for quite a while. Desiree (pronounced "DEHZ-ih-ray") peaked in the 1990s at #138, and is now at #474. Desiree Clary was once a fiance of Napoleon, and there's a Desiree in the musical A Little Night Music. Granted, all the Desiree's I have known have not been very nice, but that's another story. If you take that into account, using Desire makes more sense.

Desire has more of a diluted sensuality than, say, Passion, and is definitely more usable than Vixen. And a diluted sensuality might make it a great option for a Neo-Pagan family. To us, sex is a sacred act. Besides, desire could also be seen as another word for motivation, as in, "She had a great desire to become the best pole vaulter in the world."

Desire could be a very daring first name option or a lovely middle name option. I see it as a girls name, and that's how it has been used historically, but it's possible that it could be used for a boy as well. It's an unusual name with more history than one would expect.