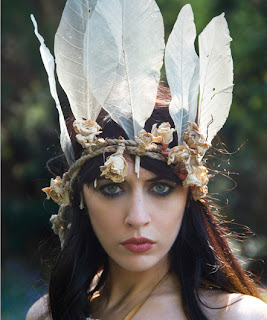 I don't know how many people outside of the United States are familiar with the American Girl company. For the uninitiated, it's a big thing. They're mainly well known for their pricey dolls, which could cost up to a few thousand dollars if you buy all the accessories. They also publish magazine and books. The books are generally tools to sell the dolls. Each doll comes from a particular time in American History, and the books are meant to tell their story. In 2002, they introduced a new character named Kaya'aton'my, shortened to Kaya. The name took off.

Kaya in the books is a Nez Perce girl. That's interesting because the sources I have state that the name is Hopi. The Hopis were located nowhere near the Nez Perce. Kaya (pronounced "KAH-yah" or "KIY-ah") is short form of Kakahoya, which means "my elder little sister." This name denotes someone who is wise beyond her years.

But this name also happens to be multinational. This is also a Japanese name referring to the yew tree. So it should be no surprise that it's most popular for girls in Hawaii, which has a rather large Japanese population. If you've watched the Studio Ghibli movie Princess Mononoke, you know that there is a minor character named Kaya.

For another Native American tribe called Quechuan living in Colombia, Kaya means "tomorrow." In some European countries, it is used as a form of Katherine. In Indonesian it means "wealthy." Kaya is also a common traditional Turkish boy's name meaning "rock." In Ancient Sanskrit, Kaya is a word referring to the physical body, and has come to mean "skin" in some areas of India. There is a successful line of cosmetics with this name in that country. Unfortunately, this might not be a name you want to use if you plan on going to Jamaica a lot. There, "kaya" is slang for marijuana. Remember the Bob Marley album?

Kaya did not appear anywhere on the charts before the American Girl books came out. It turned out to be an alternative to the ultra popular Maya and Kayla. It's peak on the top 1,000 was at #542 in 2003. Now it rests at #771. Possible variants, depending on what culture you're using, could be Kaia and Kaja.

Personally, I love Kaya. It's strong, accessible while being exotic, and a good option for someone born during Thanksgiving. I'm not surprised that it had a small boost of popularity. It looks like it's star is fading somewhat, but it would still make an excellent name for any little girl.

Image Credit:
http://blessedwildapplegirl.tumblr.com/
Posted by Isadora Vega at 10:17 AM