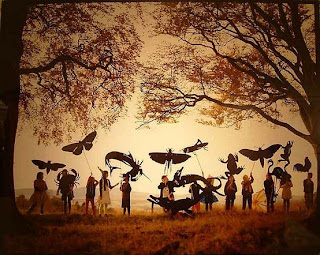 Since this is a blog about Neo-Pagan names, it would be interesting to see what real Pagans name their children.

Well, there's a problem there. Witches are still a secretive bunch. Either most Neo-Pagans choose not to have children or they're keeping them hidden from Internet eyes.

This could be done for a number of reason. One of them might be a fear of having their children taken away because of their religion. This is not an imaginary fear. Many times, an ex would use the former partner's religion as a tool against them in divorce proceedings, with varying degrees of success. Unfortunately, one of the first lessons I learned researching Neo-Pagan families is that the family court system is not always our friend. Or maybe they just don't want their children to be singled out in their community. Even Pagan Mom bloggers are wary about posting anything specifically related to their kid.

Another consideration is that the idea of a "Pagan family" is a new development. Today, there are books for families and kids, children's activity in Pagan gatherings, and groups that tone down some of the more explicit sexual components of our culture. But as early as forty years ago that was completely unheard of. They had no idea how to deal with kids back then. Most of us didn't grow up in Pagan families ourselves. So logically there wouldn't be as many names to find as I might like. But as more and more of us are starting to have kids, more and more of us start speaking out.

This isn't by any means a complete list. But what kind of conclusions could you draw from this selection?

??? - Confessions of a Pagan Soccer Mom

"Chickadee" and "Sharkbait," but I highly doubt those are their real names - Musings of a Kitchen Witch

From The Pagan Household:

Image Credit:
Found via http://pinterest.com
Posted by Isadora Vega at 11:31 AM