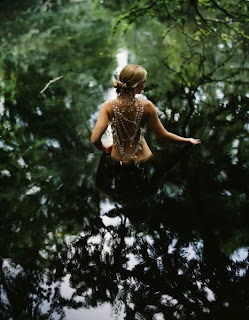 River is a popular nature name that rose up the ranks with the help of Hollywood.

The word river is ultimately derived from the Latin word riparius, meaning "of the riverbank." It is one of those hippy coinages from the 1960s that has since become normalized, which would make it about as old as Wicca in America.

There are many famous rivers both in mythology and in the mundane world. In Norse mythology, Elivagar is the name of eleven rivers that existed in Ginnungagap at the beginning of the world. The River Styx is a place that you will only find in Greek mythology, and that's where you meet the ferryman Charon who will take you across to the land of the dead. The Ganges River is the must sacred river in India, personified by the Hindu goddess Ganga. The Nile River was of great importance for the Ancient Egyptians because they depended on it's annual flooding for farming.

This vocabulary word entered "naminess" thanks to American actor River Phoenix. Believe it or not, the name he was born with was River Bottom. Well, River Jude Bottom. His parents named him River after the river in Herman Hesse's novel Siddartha. It sounds almost charming, like a Mark Twain character, but I can totally understand why it was changed. His sibling's names were Rain, Juaquin, Liberty, and Summer. River Phoenix became a teen idol most well known for the 1986 film Stand By Me, but he died from a drug induced heart failure in the early 1990s. In a way, his untimely death did a lot for his name.

As a boy's name, River has been rising since the 1990s. It is now at #436. Originally, it was only considered to be a boy's name, but a character from a television show may be changing all that. In the science fiction show Firefly and the film Serenity, River Tam is a gifted and mysterious teenager who takes refuge in the transport ship. The show premiered in 2002. And then it was given to a female character in Doctor Who, which added to the nerdy appeal. For girls, it first appeared in the top 1,000 in 2009 and now ranks at #972. You could use words that mean "river" in other languages as variations like Riviera and Riviere.

River is a lovely water element name that is both strong and gentle. I can certainly see it appealing to Neo-Pagan peoples. A religious factor would not be immediately apparent in this name, but there is a very strong love of nature conveyed in River.