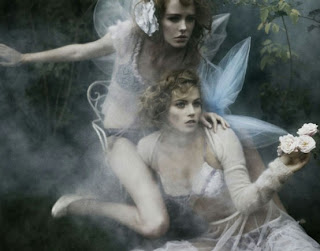 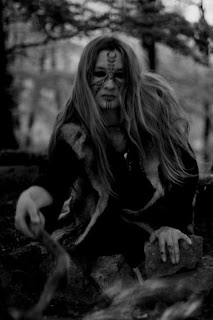 Blessed Beltane, everyone! And a Blessed Samhain to everyone in the Southern Hemisphere! Since flowers are very important in this festival let's talk about Yarrow.

Yarrow (pronounced "YEH-row") is an English word derived from the Proto-Germanic garwo. It has never meant anything other that "yarrow." It is possibly related to the word "yellow" but no one is certain of that. The scientific name for this plant is Achillea millefolium, but people also call this plant Milfoil, Seven Days Love, Woundwort, Plumajillo ("little feather") and Devil's Nettle (the later comes from it's association with Witches).

Yarrow is native to temperate regions of the Northern Hemisphere specifically in Europe, Asia, and North America. The plant is known for it's strong, sweet smell and it's featherlike leaves. It's flowers come in many different colors. It is considered a great plant to have in a garden because it repels insect pest and attracts predatory insects that eat insect pests.

But that's not the only benefit yarrow gives us. This plant has a long tradition of being used for medicinal purposes, and most of its healing properties have been proven. Yarrow was often used in battle during ancient and medieval times because it encouraged clots and stopped the flow of blood. It's naturally dark blue essential oil can be used as an anti-inflammatory and is classically used to treat colds and the flu. Yarrow is traditionally used in Native American medicine by tribes all across the country. Yarrow is also edible, and was a very popular dietary staple in Europe during the middle ages (although pregnant women should not eat yarrow). It was also occasionally used as a flavoring for beer. Even birds know that this plant is useful. The common starling uses yarrow to line their nests because it keeps parasites away.

It should be no surprise that yarrow shows up a lot in mythology. Yarrow features heavily in Chinese culture where it is considered lucky. For example, they say that they grow around the grave of Confucius. In Greek mythology, the centaur Chiron taught Achilles how to use yarrow on the battle field, knowledge that he later used in Troy. In Britain, they were commonly placed in Saxon amulets for protection.

Yarrow is especially connected to Beltane because of it's use in love and fertility spells. This plant is associated with Aphrodite, one of the goddesses of this holiday. In nursery rhymes, placing a satchel of yarrow under your pillow will make you dream of your true love. Using it as wedding decorations and placing it over the marriage bed will guarantee at least seven years of love and passion. An old British tradition dictates that shaking a yarrow leaf inside ones nostril determines the devotion of a lover. If it bleeds, his love is true (this is not particularly reliable, yarrow is a nasal irritant so if you stick it up your nose it's going to bleed no matter what). Yarrow is also used to boost courage and self esteem, things you also need in order to have a healthy relationship with someone. If a large patch of yarrow grows in a field it is believed that there's a lot of energy grounded in that space. They are good places to relax and meditate. Yarrow can also be used to drive away negativity.

Yarrow has never been a common name in the United States. I don't even see any indication that it was used during the Victorian flower craze. But the popularity of Willow makes me think that it's not so crazy. In Neo-Pagan tradition the plant is considered feminine, but lots of baby name resources that I've seen will list this as a boys name. This is most likely due to it's history as a surname. I think it works just fine for either.

Yarrow is interesting to me. I don't think I would ever use it, but the plant's history only shows good things. It's a great unusual botanical name for a little Witchlet.