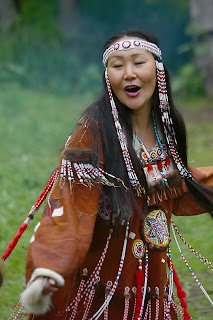 Continuing on with our Thanksgiving theme, here's another great Native American name.

Nokomis (pronounced "noh-KOO-mis," I think) means "grandmother," but there seems to be some confusion as to what language it comes from. Different sources list it as Chippewa and Cheyenne, but it looks like the Ojibwe have the greatest claim to it. This name is used in traditional stories that also feature a character named Nanabozho, and it is believed that Longfellow's poem "The Song of Hiawatha" is partially inspired by this mythology.

Nokomis is an important character in both the poem and the original stories. She is the daughter of the moon and fell down to earth, which is why the meaning of this name is sometimes listed as "daughter of the moon." Eventually she bears a daughter named Wenonah, who allows herself to be seduced by Mudjekeewis (the spirit of the West Wind) despite her mother's warnings. Mudjekeewis abandons her, and Wenonah dies while giving birth to Hiawatha. Nokomis raises and educates her grandson.

This name has been given to many towns and natural landmarks in America. There is a Nokomis in Florida, Alabama, Illinois, and Minnesota. There is also a Nokomis in Saskatchewan, Canada. So it is well used as a place name.

On people, it's another story. Nokomis has never been a popular name in the United States. I can't think of any other more popular name that even sounds like Nokomis. Plus I have to mention that it has the same "grandma" quirk that Nona does. Some people might find that slightly odd to give a child. But we all hopefully become old sometime. I suppose that you can say that it's a crone name showing wisdom.

So if you want a beautiful, unique, literary Native American name, Nokomis is you're girl.

I see that I've had a lot of hits on the Pagan Name of the Year entry (thanks to Appellation Mountain), but only one new comment. I know there are more! Keep the comments coming!