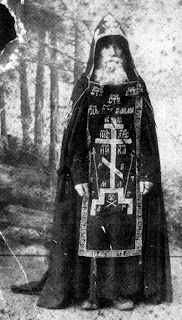 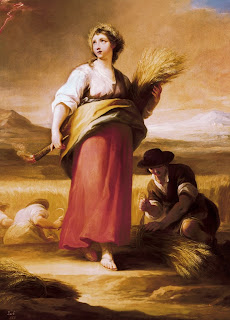 Blessed Lughnasadh to all in the Northern Hemisphere! As this holiday is all about the harvest of grain, it's the perfect time to profile a goddess of grain.

Ceres (pronounced "SEER-ez") is derived from the Proto-Indo-European ker, meaning "to grow." This is also the root of many other English words like cereal, kernel, create, grow, corn, and increase. Throughout the Ancient Roman era, Ceres' name was synonymous with grain and bread.

Ceres is the Roman counterpart of the Greek goddess Demeter, and all of her mythology is the same. She is the daughter of Saturn and Ops and sister to Jupiter, Juno, Vesta, Neptune, and Pluto. She is the goddess of agriculture, fertility, and motherly relationships, and is considered to be the protector of laws. She is still the mother of Persephone, but she is also the mother of Liber, Libera, and Proserpina (who is sometimes, but not always, thought to be the same person as Persephone).

Ceres was a very popular goddess in Ancient Rome. It was believed that before she gave agriculture to mankind humans lived off of acorns and had no laws. She was commonly honored during marriages (which took place at night) with a torch as that is one of her symbols. Her holiday was Cerealia which occurred from mid to late April. It was celebrated by, amongst other activities, setting foxes tails on fire and letting them loose in the chariot stadium called Circus Maximus. Not all Pagan traditions should make a comeback. Much of Rome's grain was imported from Sicily, and for that reason the island was considered Ceres' "earthly home."

Ceres' legacy lives on. In the United States you can still find her image in many state buildings, particularly if that state is known for it's agriculture. This goddess appears as a character in William Shakespeare's The Tempest. Ceres is also the name of the first asteroid/dwarf planet ever discovered. It is the only dwarf planet in the Inner Solar System (Pluto is too far away). It was discovered on January 1st, 1801 by Giuseppe Piazzi. It possibly harbors life as there is evidence to suggest that it has an ocean.

Ceres has never been a common name in the United States. It's pronunciation might be slightly unappealing, it sounds like "series." I've heard it said other ways, but this is what the dictionary says and is therefore the most official. I prefer the sound of Demeter better, but Ceres is still a great name.