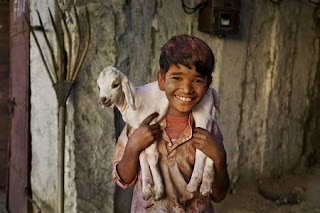 Hope you all are having a good new year! When I was doing the astrological names two years ago, Capricorn got ignored. I didn't think it was "namey" enough at the time. But I've since seen it on baby name resources, so let's take a look.

Capricorn (pronounced "KAH-prih-korn") is the tenth astrological sign. This sun sign takes place from December 22nd to January 21st. The name is Latin for "horned goat" or "goat horn." The constellation of Capricornus is located in a part of the night sky known as "the Sea" or "the Water," the same area that contains other water-related constellations like Aquarius and Pisces.

Capricornus isn't just any goat, but no one is really sure why that is. The creature could either be depicted as a goat with the tail of a fish or as a regular old goat, and these images have been around since Babylonian times. The goat-fish could have been symbolic: the mountainous buildings of Babylon were built along the Tigris River (fish swim in rivers, goats climb mountains). It could also have something to do with the Sumerian god Enki, who was the patron god of both goats and fish.

There are two different stories from Greek mythology that explain Capricorn. One story states that Capricorn is actually Pan. When he was attacked by the monster Typhon he dove into the Nile river for safety. His upper half remained goat-like, but the parts of his body that was under water turned fish-like. Capricorn can also be identified as Amalthea. Amalthea was the goat that took care of the infant Zeus after his mother Rhea saved him from his father who intended to eat him. The goat's horn was broken off and transformed into the cornucopia, the traditional symbol of prosperity.

In astrology, Capricorn is an earth sign ruled by Saturn. People with this sun sign are characterized by their grounded, realistic approach to life. They know how to set goals and plan for the future. They want to bring something of worth to the world and need to feel useful in order to be happy. They are usually the ones that finish the work started by the the more "pioneering" sun signs. But they also possess a strong need for recognition for their good work. Capricorns are not known for taking risks and generally prefer conservative lifestyles. They feel the most safe staying within the framework of conventional society. Although they take pleasure in living a simple life, they do have a tendency to enjoy status symbols. Capricorns can occasionally be a bit lonely, and unless they have a particularly flamboyant moon sign they don't show their emotions easily. They are also susceptible to mood swings. However, they are loyal and most marry for life. My mother and my brother are both capricorns. They're both practical, conventional people, even though Mother is very...colorful. Must be the moon sign.

Capricorn has never been a common name in the United States. I'm still not completely convinced that it sounds like a name. It's not bad, I just have a hard time seeing it as an option. It doesn't sound like any established name that I can think of, which may make it more or less appealing depending on your tastes. Well, to each her own.