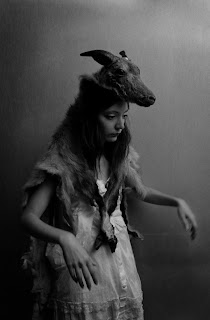 Aleister Crowley had a daughter named Nuit Ma Ahathoor Hecate Sappho Jezebel Lilith, who unfortunately died when she was two years old. And you thought Uma Thurman gave her daughter a lot of names?

Nuit (pronounced "NOO-it" or "NOOT") is the Ancient Egyptian goddess of the heavens. Her name can also be written as Nut, Nwt, Neuth, or Newet, but they all mean the same thing: "sky." She is a very old goddess. Originally she was only the goddess of the night sky, but gradually she came to represent the sky in general. Nuit also protects people in the afterlife. Her many titles include "Coverer of the Sky," "Mistress of All," "She Who Protects," and "She Who Holds a Thousand Souls."

Nuit is the daughter of Shu, the god of air, and Tefnut, the goddess of moisture. Her brother, who also became her husband, was named Geb. Geb and Nuit are a bit of an anomaly of mythology. Usually it's the male deity representing the sky while the female represents the earth. This is one of the few times in which it is the other way around. Most of the time, Nuit is depicted as a star-covered nude woman arching over Geb, the earth. It is believed that her hands and feet touch the four cardinal directions. She is also sometimes shown as a giant cow. She had at least four children: Isis, Osiris, Set, and Nephtys. In some variations of the mythology she is also the mother of Horus, but in most cases Horus is her grandson. The inside of tombs were often painted a deep blue with lots of stars to represent her, and her image was painted inside the sarcophagus.

The story as to how she gave birth to her children is an interesting one. Ra, the sun god, was paranoid over others stealing his throne. So when it became known that Nuit was pregnant, he became furious and decreed that Nuit was not allowed to give birth on any day of the year. At this time there were only 360 days in a year. Nuit hatched a plan with Thoth, the god of wisdom. Thoth played gambling games with Khonshu, the god of the moon, and every time Khonshu lost he gave Thoth some moonlight. Eventually Thoth had enough moonlight to make five extra days. Since these were technically not a part of the year, Nuit could have her children. When Ra found out, he separated Nuit from Geb for all eternity, but she never regretted her actions.

The reason Aleister Crowley gave this name to his child is because Nuit is an important goddess to the religion he founded, Thelema. Basically she represents the All, or the universe. Crowley's second daughter, in case you were curious, was named Lola Zaza. Pretty tame by comparison.

Nuit has never been a common name in the United States. It's interesting to note that Nuit is also French for "night." Some sources will claim that the name of the goddess is the origin for the English word Night, but I highly doubt that.

Nuit is definitely an interesting choice. I would never suggest going for the variant Nut, though.