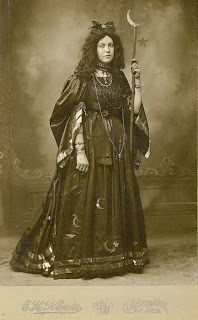 Neo-Pagans should find this foreign holiday custom quite interesting.

Befana (pronounced "beh-FAH-nah") is a folkloric character from Italy. Her name is of uncertain origin, but there are a few pet theories. A popular theory is that her name comes from the Italian word for Epiphany (Epifania), because that is the holiday she is associated with. Other sources state that it comes from the name of a goddess, more on that later.

Befana resembles a traditional witch character, an old woman wearing black and riding a broomstick. She's often covered in soot because she enters people's houses through the chimney. But there is definitely nothing evil or scary about her. According to the story, Befana was visited by the Three Wise Men a few days before they saw Jesus. They were there to ask for directions, but Befana could not help them. The men stayed for the night. The following morning, they invited her to see Jesus, but Befana declined, saying she had too much housework. But she later had a change of heart and set out to find them, but to no avail. She is still searching for the little baby but while she looks she leaves gifts, candy, and fruit for good children and coal, garlic, and onions for bad children.

It should come to no surprise that Befana is based off of a Pagan tradition. Strenua, sometimes called Strenia or Strina, was the Sabine/Roman goddess of purification, well being, and the new year. The first recorded mention of her holiday stated that it took place on January 1st. Since the Ancient Roman new year was on March 1st, this doesn't really make any sense. It's unclear whether or not it was moved from the other date. In any case, the name Strenua comes from strenae. Strenae were the gifts that they exchanged as good omens, traditionally figs, dates, honey, and money. It is said that strenae comes from the Sabine word for "wellfare," but no one knows if this is correct.

The Befana tradition is virtually unheard of here in the United States. So if you use Befana, it'll sound like just a pretty if unique name. Pagans that practice Stregheria might hold a festival in Befana's honor, but aside from that not many Neo-Pagans pay attention to her. At the point in which the Catholics get gifts from her (January 6th) we're already gearing up for Imbolc, and our new year is on November 1st. But Yuletide would be a nice time to give her some attention.

So if you're looking for an unusual Yuletide name that honors Italian roots, Befana could work well.