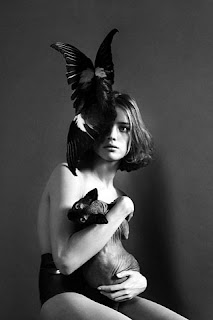 This mysterious and mythical figure in Neo-Paganism might be a new one for some people.

Aradia (pronounced "ah-RAH-dee-ah," I think, from what I know of Italian pronunciations that seems right) was introduced to the worldwide Neo-Pagan community due to the Charles Leland book Aradia: Gospel of the Witches, published in 1899. This book is responsible for starting Stregheria, or Italian-based Neo-Paganism. According to Leland, this gospel was the religious text of a group of Witches living in Tuscany, Italy. Aradia is portrayed as being the daughter of the Roman goddess Diana, their Queen of Witches, and Lucifer, described as a god of light driven out of Paradise for his vanity. She is a Messiah brought down to earth to teach the Italian peasants Witchcraft, so that they may rise up against the upper classes and the Catholic Church. She becomes the very first Witch, and tells her students that "ye shall all be freed from slavery, And so ye shall be free in everything."

This book is a source of a lot of controversy, not least of which is who Aradia really is. Folklorist Sabina Magliocco hypothesized that Aradia is a variant of Erodiade, which is the Medieval Italian pronunciation of Herodias. Herodias is a Greek name meaning, "to watch over." In the New Testament, Herodias is the mother of Salome, the woman who brings about the death of John the Baptist. So generally, she was not a well liked character to Christians. However, there was a Cult of Herodias during this time that practiced Witchcraft and viewed Herodias and Diana as the same person. Herodias was venerated in much of Europe but was especially beloved in Italy, she and Diana are the most frequently mentioned deities in witch-trial transcripts. It is possible that this cult is the basis for the type of Witchcraft described in the Gospel of Witches.

Another theory was presented by Raven Grimassi, who believes that Aradia is based on a real person. Grimassi further stated that the version presented in the Gospel of Witches was a "distorted Christian version." Aradia de Toscano was born in Tuscany in the year 1313. She was taught Witchcraft by her aunt, and she used this knowledge to "challenge the existing order." She recruited followers and started the Old Religion. This scenario is not completely out of the question, but other scholars have had a hard time verifying this claim.

But wait, there's more! According to Romanian historian Mircea Eliade, Arada, also known as Irodiada, is the name of the Romanian Queen of the Fairies in folklore. Some people believe that Arada is an interpretation of Diana. But then how did the name get to Italy?

I highly doubt that we would ever untangle the truth of Aradia's origin, but that doesn't stop her from being one of the most important figures in the contemporary Neo-Pagan scene. Some Wiccans use the name Aradia as the name of the Great Goddess, or the Lady, She is mentioned in other sacred texts written by heavyweights like Gerald Gardner, Z. Budapest, Aiden Kelly, Myth Woodling, and Janet and Stewart Farrar.

This is a blog about names from a Wiccan perspective, but about 95% of the names profiled here could easily be used on a non-Pagan. Aradia isn't one of them. If I met someone with a daughter named Aradia, I would be surprised if they weren't Pagan. Maybe slightly insulted, even. Maybe I'm being overprotective of it and it should be shared with the world, I don't know. But there are very few names that are truly ours anymore, and there might be value in protecting the ones that are left.

In any case, Aradia is one of my favorite girls names, and I hope to give it to a daughter someday.