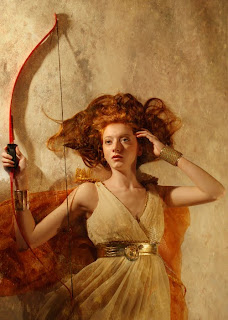 Pop quiz! Is this name for boys or for girls? Trick question, it's for both.

Artemis (pronounced "AHR-teh-mis") is a Greek name with an unknown meaning. The Greek etymology could be related to either artemes meaning "safe" or artamos meaning "butcher." However, some historians believe that the etymology may be Proto-Indo-European because of evidence found on Neolithic remains, in this case the name could mean "bear." This is also the name of a popular goddess. Artemis presides over the moon, hunting, wilderness, childbirth, virginity, and maidens. She is the daughter of Zeus and Leto, and the twin sister of Apollo. She is often depicted wearing a crescent moon on her head, and always carries her bow and arrow. Deer, bears, hunting dogs, and cypress trees are especially sacred to her. Her Roman attribute is Diana.

Artemis is also well known for being something of a man hater. I don't blame her, since so many of them tried to rape her or her attendants. Artemis was determined to hang on to her virginity. The only one that captured her heart was her hunting companion Orion, and even he died at her hand (or Gaia's hand, depending on who tells the story). She also plays a large part in the story of the Iliad. Artemis, her brother, and her mother were venerated in Troy, so they were on the side of the Trojans. In order to stop the Greeks journey, she became the sea. The only way she would let them pass was if they would sacrifice Iphigenia, Agamemnon's daughter. Agamemnon promised to commit this sacrifice, but later broke this promise. Artemis remains popular with Neo-Pagans today. A UK-based organization called Children of Artemis is well known for holding festivals and conferences.

Naming boys after female deities is nothing new. Don't believe me? I'll give you an example: Jose Maria. I have two ancestors with this name (I should post my family tree, my Puerto Rican side is quite epic for name nerds). It's seen as quite a posh option in some European countries today. Many other Virgin Mary names, like Socorro, Monserrate, and Guadalupe, are used for boys as well as girls. Not convinced? How about Demeter, the Greek goddess of the harvest? I was rather shocked to find that Nymbler.com lists this as a boys name only. Demetrius and Demetri are male variants of Demeter.

Artemas is the male variant of Artemis. Apparently, this name survived well after Christianization, because it's mentioned in the New Testament. Saint Artemas was one of the seventy disciples. It was, shockingly, a popular Puritan name in the 17th century. One famous bearer, Artemas Ward, was a general in the American Revolutionary War. He was also the congressman of Massachusetts and an author. I went to college with a Ukrainian guy named Artem, so it's variations are used in other parts of the world.

However, if it's used on a boy and spelled Artemis, it's a good bet that the namer was influenced by Artemis Fowl. Artemis Fowl is a series of young adult books by Eion Colfer. The title character is a teenage criminal mastermind, scheming to build his fortune. In the first book, he kidnaps Captain Holly Short of the fairy LEP, but in later books he works with the fairies and only steals from those who deserve it.

If you plan to use any variation of this name, you should know that they are quite rare in America. Artemis has some well known namesakes, including an English writer and an American actress, but it hasn't charted. Artemisia, which is also a botanical name, is equally rare. One option some might not know about is Arthemise. It's a French surname that experienced some use in the Cajun region. For boys, there is also Artenio. And all versions could be easily shortened to Artie.

So if you want a name for either gender that honors Greek mythology and the moon and you are not afraid to rock American gender politics, Artemis could be for you. I have heard that some parents feel uncomfortable using this name if they already have a boy named Orion, but if you don't have that problem go for it! Artemis is an old favorite of mine, and Artemas is a new one. Let's see if people can free their minds and start using these gems.