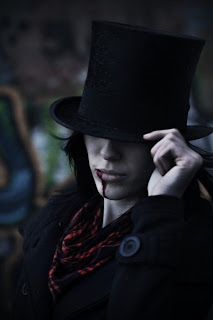 I'm sorry to say that Thanksgiving just kind of sneaked up to me this year, so I didn't go through the trouble of preparing any type of theme week. Plus I have a whole bunch of name profiles to go through. But this is the time of year in which virtue names are brought up a lot. Could this one ever make a comeback?

Ernest is an English and German name that is derived from the Germanic word ernst, meaning "serious," "zealous," "firm," or "resolute." Some sources state that it also means "battle to the death." The vocabulary word is spelled earnest, which could also be used as a name, but usually the proper form drops the "a."

In the olden days (definitely the 1920s and 1930s, I'm not sure how long this lasted) Ernest was slang for "homosexual." It came from the play The Importance of Being Earnest by Oscar Wilde, who was outed as a gay man when the play first came out. It's fascinating to watch old Hollywood movies that show characters named Ernest swishing about in the most effeminate way. Everyone was expected to get the joke. I'm not saying that to try to deter anyone, it's extremely dated slang and most people will not even be aware of it. I'm just saying that if you know people in the older set who are sneering at this name, this is probably why.

Americans are likely to associate this name with two famous namesakes. One of them is the author and explorer Ernest Hemingway, famous for works like For Whom the Bell Tolls and The Old Man and the Sea. If you have a son named Ernest, it's probably not a good idea to name his brother Albert, unless you don't mind the Sesame Street connection.

On the American charts, Earnest peaked in the 1890s at #24. It's never left the charts, but it has been steadily dwindling since then. It now rests at #851. I do have an "Uncle" Ernie (my grandfather's cousin), although his name was actually Ernesto, which now ranks at #490. Other variants include Ernestus and Erno. The female variant Ernestine has also gotten a lot of attention amongst name enthusiasts, and there is also Ernestina. Those peaked in the 1920s at #203 and the 1930s at #774, respectively.

I hate to say it, but Ernest sounds like a bumpkin to me. So it's not one of my favorites. But there's a chance that it'll become a big name again. Perhaps when my children start having children this name will be fresh again.