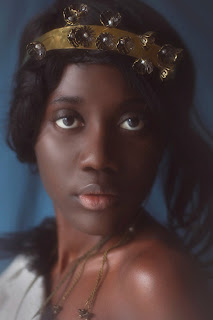 If you've watched a television show that featured witches, you can bet that one of them was probably named Ember. Ember is one of the trinity of cliche witch names, Willow and Raven are her sisters. But there's just one problem with the association: unlike the others, I've never seen any real life Witch named Ember.

I'm serious. Go look yourself. There's no well known Neo-Pagans with this name. I don't remember seeing anyone go by this name on forums. And I've never met an Ember. A quick google search revealed maybe two Embers, but it's not as popular with us as the media would suggest. There are far more Wolfs and Ravens. So television is proliferating a misconception about witches that has little basis in fact. Go figure. Don't get me wrong, it's a great name. And it could be perfect for Neo-Pagans.

You might be surprised to know that Ember (pronounced "EHM-ber") has more than one meaning. The most obvious is it's fiery one. In the English language, an ember is a burned, smouldering coal or a spark. The word is derived from the Pre-Germanic word for "ashes." But in Hungarian, Ember means "man" or "person."

Ember is a new addition to the American Top 1,000. It first appeared in the girls column in 2009, and last year it ranked #825. Overall, pretty mild popularity so far. It's more unusual as a boy's name. Little boy Embers are mainly found in Hungary.

Ember's debut on the charts coincide with the film version of City of Ember, which appeared in theaters in 2008. The movie received mixed reviews, but it appears to have inspired a few parents. The City of Ember by Jeanne Duprau is a young adult post apocalyptic fantasy. It's the first in a series and is quite successful. In the books, Ember is an underground city that is slowly running out of power. The two protagonists, Lina Mayfleet and Doon Harrow, must decode clues left by the original builders of the city in order to lead the people to the outside world. Other fictional namesakes include one of the main characters in Piers Anthony's novel Isle of Woman. Witch Ember is a fantasy novel by John Lawson, but it doesn't appear that Ember is the name of any characters.

A potential problem may be that little Ember will constantly have to correct people who think it's Amber. I think that's ultimately not a big deal, but it will be up to the namer to decide that. A source listed Ember as a variant of Jeremy, but I'm not sure I buy that. It could very easily be a nickname for September. As a girl's name, Ember has a lovely sound but isn't overly frilly. As a boy's name, it's strong without being overly macho. It's a great nature name for a little witchlet.