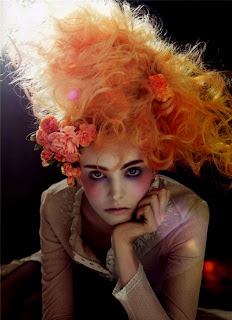 Amber C has requested her own name. Coming right up!

Amber is derived from the Middle Persian word ambar. It was originally used to describe what is now known as ambergris, which is the hardened secretions from the intestines of sperm whales. In the olden days, ambergris was used as a fixative in perfumery, which explains why anyone on earth would want to collect such a thing. Despite the fact that these are not even remotely similar in appearance, the two substances were confused because they often washed up on beaches together. Nowadays, people would say that it's a color name used to describe a pale, brownish yellow.

Amber is one of the few gemstones that is not actually a gemstone. Gemstones come from the earth, but amber comes from fossilized tree resin. People were able to figure this out due to the occasional insect trapped inside. However, amber is treated like a gemstone and used frequently in jewelry. The color of amber varies from pale yellow to dark brown. Occasionally you can find red specimens. Blue and green amber are extremely rare and highly prized (I didn't think that such a thing existed until I looked it up). Amber is most plentiful in the Baltic region, although the ancient trees where they came from grew in Sweden. Until fairly recently, that was the only place to find amber. During the 1800s specimens were found in North America as well.

Amber has always been associated with magick and remains a favorite of Wiccans and Shamans. Ancient people believed that amber contained the essence of life due to the insects and other small animals trapped inside. If amber is rubbed with a piece of silk it will collect dust and ashes. This led the Ancient Greeks to believe that amber had electrical properties. The Greeks name for amber was elektron (meaning "formed by the sun") and was considered sacred to Helios, the sun god. Amber can be burned as incense, and in the ancient days it was burned to purify and area in which childbirth would take place. It was also thought that gazing into it would improve eyesight. Because amber is warm to the touch, there's a sensual aspect to the gemstone as well. It is believed that this stone attracts love and sooths the nerves.

Amber is a bit of a dated name. In fact, I associate it with my generation. It first appeared on the American top 1,000 during the 1950s and peaked during the 1980s at #12. It's still well used: it now sits at #260. The name is most recognized as a girl's name, I've never heard it suggested for a boy. Although back in the round-up of Romani names I found a boy named Amberline. Perhaps that's related, perhaps not.

I wouldn't use Amber personally. I knew too many Ambers growing up. That being said, it does have "Witchy" value and if you were looking for a Wicca-lite name this would be a good choice.