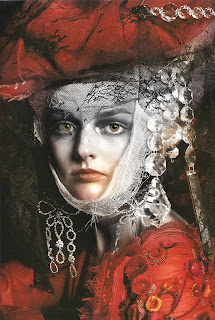 Somehow I totally missed Marti Gras. I apologize, but to be fair it's not a holiday that we pay a lot of attention to up here in the Pacific Northwest. But it's important to Neo-Pagans because the roots of the Mardi Gras celebration are also in Lupercalia. Didn't we talk enough about Lupercalia back during the Valentine's day week? Well, I guess I should still acknowledge Mardi Gras in some way. To tell the truth, I've always been more drawn to Carnival in Italy. Why? Because I'm half Italian American, that's why! And since Mardi Gras and Carnival are actually the same holiday, it works out great.

Venetia (pronounced "veh-NEE-shah") is the Italian city of canals that we English speakers know as Venice. And when people think Carnival, they think Venice. This city holds the most internationally well-known Carnival celebration is famous for it's beautifully crafted carnival masks. Carnival and Mardi Gras is celebrated by committing all manner of debauchery the days before Lent. The masks were used to aid such debauchery by hiding people's identity and social class.

The origin of the name Venetia is somewhat debated. It could possibly be a Latinized form of Gwynedd, which was the name of an ancient kingdom in Wales. A popular variation of Gwynedd is Gwyneth. So the names Gwyneth and Venetia are cousins, if you can believe it.

For the longest time, Venetia was a place name, and nothing more. But in the 1600s, Venetia entered namehood with the help of a celebrity. Go figure. Venetia Anastasia Stanley was the child of a minor noble in England who was well known as a sensual beauty and for her suspicious death. A descendant of Venetia Stanley with the same name was a well known English socialite. Other namesakes include Venetia Phair, the English girl who gave the former planet Pluto it's name.

The name is relatively unknown in the United States, and has never charted. But it has some popular sound-alikes. Vanessa peaked in the 1980s and still remains on the charts. Vienna has been getting some exposure. And the name of another popular Italian tourist city, Florence, is much more widely used. Alternate variations of Venetia include but are not limited to Venezia, Venitia, Vonita, and of course Venice.

Venetia is a beautiful, cultured, and regal sounding name. And if you're living in America, it'll be very unique. It's so similar to other names that I have a hard time thinking of any potential negative reactions. It's a subtle tribute for a Mardi Gras baby.