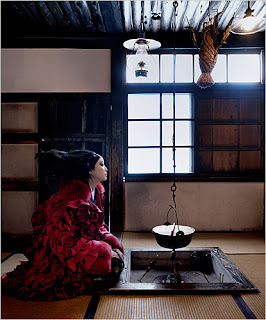 Taking a break from my mountain of requests to profile this Japanese gem.

Ito (pronounced "ee-too-oh," I think) is the sixth most common family name in Japan, which makes finding real-life namesakes fairly easy. And, as far as I can tell, it is also occasionally used as a given name. Like all Japanese names, the meaning of Ito varies depending on the characters used to write it.

First, it could mean "this wisteria," and if that is the case then there's some back story. The fact that it references that flower indicates a connection to the Fujiwara clan. I believe that I've mentioned this family before on this blog. Historically, they were very influential. This family was well known for dominating Japanese politics from the 700s to the 1100s, which they achieved by marrying off their daughters to emperors.

Ito could also mean "thread," "yarn," or "string." This also needs some explanation. There is a very old tradition in Japanese culture that originated in Chinese culture called the "red string of fate." According to legend, the gods tie a red thread around the little finger of two (not biologically related) people who are destined to meet each other. Depending on who you ask, these two people become lovers. This is very similar to the western concept of soulmates.

Ito has never been a common name in the United States. I like this name because of it's second meaning. Even though I'm not so certain that I believe in the concept of "the one" I still find it romantic. However, one should expect this name to be mispronounced constantly in America. Looking at this name I thought it would be easy to figure out how to say, but apparently not. Variations on the English spelling include Itou and Itoh.

I know that the name appears in some manga (graphic novels), so it might be of interest to Japanese enthusiasts. I don't find it very likely that this name will be used with any regularity in my country, but I still find it beautiful.

Image Credit:
I don't remember where I got this.
Posted by Isadora Vega at 10:33 PM