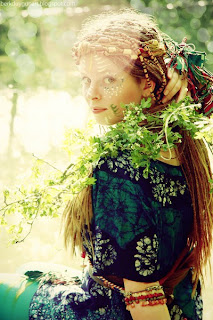 Sorry for the long absence. Did you miss me? The botanical Fern was requested by Bree.

It should come to no surprise to anyone that has actually seen a fern that it's name comes from the same root as "feather" and "wing:" the Proto-Indo-European por-no. No doubt it was given to the plant in reference to the delicate appearance of it's leaves. Ferns are an ancient species of plant with fossils dating back to 360 million years ago. That would make them older than dinosaurs. There are many species of ferns that can live in a wide variety of habitats. The most common places are woodlands, mountains, swamps, tropical forests, deserts, and fields. In some places, they can be a very serious weed.

In Neo-Paganism and spell casting, ferns are predominantly used for protection. An English tradition says that hanging dried fern leaves inside the house will protect the inhabitants. They can also be carried by travelers for this purpose. Due to the plant's ability to grow as if from thin air (ferns reproduce via spores), it was believed that ferns could grant invisibility. Ferns have no flowers or seeds, but that doesn't stop such things from appearing in mythology. There are many Northern European traditions that say that fern flowers and seeds grant happiness or riches. Ferns have very few practical uses, although they can be eaten and used for decoration.

Many baby name resources might say that Fern first appeared as a given name in the classic children's book Charlotte's Web by E. B. White, but that is simply not possible. The book was published in 1952 and the name's peak in the United States was before that. Remember the Victorian flower craze? Well, there was a similar craze for all things fern going on at the same time called "Pteridomania." Fern motifs were printed onto everything. I'm willing to bet that that's when the name first came into use. Speaking of the Victorians, in their "language of the flowers" ferns symbolize magic, sincerity, and fascination.

Fern is a name with a retro vibe. It peaked in the 1910s at #197 and dropped sharply off the charts during the 1950s. Ferne peaked during the same time at #450. It has never been used as a boy's name with any regularity, which is somewhat surprising to me. We use Fernando, Fernand, and Vern, so why not Fern?

I really like this name. I think the time is ripe for a revival on this one. What do you guys think?