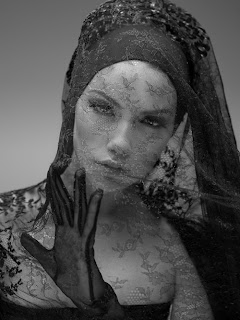 Since this goddess is responsible for making winter, and we are slowly moving into spring (around here, anyways), this is an appropriate time of year to be profiling her name.

Demeter (pronounced "deh-MEE-ter") is a Greek name. Most sources will state that the name comes from the elements da ("earth") and meter ("mother") which would make the meaning "earth mother." That is the most popular theory and it makes perfect sense. But the "De-" could also come from deo, meaning "barley," turning the meaning into "corn mother." This also works as Demeter is seen as a food giver in general. Lastly, "De-" could come from the Proto-Indo-European dem which means "house." "Mother of the House." All of these explanations fit.

Demeter is the Greek goddess of agriculture and the harvest and that is how she is most well known. However, she also presides over the sanctity of marriage, sacred law, and the cycle of live and death. She may be linked to an earlier goddess from Minoan Crete traditions or maybe even the pre-Hellenic Great Goddess. In Homer's The Odyssey she's described as a blond. Demeter is the daughter of Cronos, the sister of Zeus and Poseidon, and the mother of Persephone. Her Roman equivalent is Ceres.

According to some of the oldest myths, Poseidon and Demeter conceived Persephone when they were in the form of horses. As a mare-goddess, Demeter tried to hide from Poseidon amongst the horses of King Onkios. This didn't work. Poseidon found her right away. Demeter was furious at Poseidon's assault but washed her anger away in the River Ladon. Persephone was born as a horse but changed into human form later along with her parents. In some versions of the story the union also conceived Arion, an immortal stallion. He did not change into a human, but he could speak.

Demeter features prominently in story of Persephone and Hades. Demeter was very protective of her daughter, and hid her away from men. That didn't stop Hades from falling in love with Persephone and stealing her away. Wild in her grief, she neglected her duties as the goddess of the harvest and created winter, which killed all the plants and a good number of animals and humans. Some might argue that the overbearing mother figure that went crazy and killed a whole bunch of mortals isn't a great namesake. But come on, her daughter was kidnapped! Wouldn't you go a little crazy?

Demeter has never been a common name in the United States. Variations include Demetrius, Dimitri, Demitry, and Demitria. A lot of these variations are well used in Russia, or at least that's my impression. I was shocked to find that some baby name resources will only list Demeter as a boy's name. So like Artemis it is a unisex goddess name.

Persephone's been getting some attention and I wonder why some of that love hasn't reached over to Demeter yet. Personally I like Demeter much better. Ever since I first heard it as one of the "sensible, everyday names" you could give a cat in the musical I've loved this name. The "overbearing mother" tag doesn't bother me. It's a good, strong Witchy name.